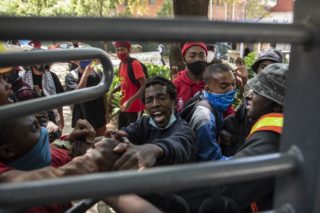 Rubble and damage to the sidewalk is seen after Wits University students blocked Empire Road, 9 March 2021, during a protest as they demand that all academically deserving students must be allowed to register, including those with historical debt. Picture: Michel Bega A man poses with a copy of the The Sun at a newspaper stand in London, Britain, 09 March 2021. US channel CBS aired a television interview with Britain’s Harry and Meghan, Duke and Duchess of Sussex on 07 March. Buckingham Palace is yet to respond to racism allegations following the TV interview that was broadcast in the UK on 08 March. Picture: EPA-EFE/FACUNDO ARRIZABALAGA An image taken with a drone taken on 08 March 2021 shows an aerial view of the area where a large landslide destroyed several homes at Ask in Gjerdrum, Norway, on 30 December 2020. Nine people were found dead due to the incident and one is still missing. Around 600 residents who were evacuated after the landslide were allowed to return to their homes on 03 February 2021. Picture: EPA-EFE/Stian Lysberg Solum A Sadhu, a holy man in Hinduism, looks on while taking part in a religious rally during the preparations for the annual Hindu festival of Maha Shivratri, at Pashupati Temple in Kathmandu, Nepal, 09 March 2021. The festival, celebrated on 11 March, sees Hindu devotees from across the country and neighboring India gather to celebrate the birthday of Lord Shiva, the Hindu god of creation and destruction, by fasting and offering special prayers. Picture: EPA-EFE/NARENDRA SHRESTHA Protesters clash with the police during a demonstration to commemorate the International Women’s Day in Mexico City, on March 8, 2021. (Photo by PEDRO PARDO / AFP) Women’s groups mobilize on the occasion of International Women’s Day, in Buenos Aires, Argentina, 08 March 2021. Thousands of women take to the streets of different Latin American cities this Monday to claim their rights and raise their voices for another year against sexist violence, inequality and the economic crisis, which have worsened in the last year due to the pandemic. Picture: EPA-EFE/Juan Ignacio Roncoroni Two trucks of the Finnish Armed Forces are seen on the side of a road following a crash in Hollola, Finland on March 9, 2021. – Heavy snowfall caused several accidents around Finland on March 9. (Photo by Lauri ROTKO / LEHTIKUVA / AFP) Oxen belonging to farmers are taken on procession to pay obeisance to Hindu deity Basava (also know as Nandi), the vehicle of Lord Shiva during an annual fair held in Thotagere village prior to Hindu festival Shivarathri, on the outskirts of Bangalore on March 9, 2021. (Photo by Manjunath Kiran / AFP) Workers attach a giant poster, created by the famous Austrian artist and caricaturist Gerhard Haderer, featuring Austrian Chancellor Sebastian Kurz, during a media event titled “Refugees by Initiative Courage” near the Naschmarkt market in Vienna, Austria on March 9, 2021. – The event is a protest action against cold-hearted politics of the Austrian government regarding refugee policies, six months after the fire in the Moria refugee camp in Greece. The display location was chosen between Chancellor Kurz’ office and his home. (Photo by Joe Klamar / AFP) A man looks for valuables in the polluted Yamuna River in New Delhi on March 9, 2021. (Photo by Money SHARMA / AFP) Activists of the Aurat March celebrate as they gather during a rally to mark International Women’s Day in Karachi on March 8, 2021. (Photo by Asif HASSAN / AFP) A health worker gives Antonio Ferrari (92) a dose of the Pfizer-BioNTech COVID-19 vaccine, at his house in Lima on March 08, 2021, as Peru starts vaccination of the elderly, police and military. (Photo by ERNESTO BENAVIDES / AFP) George Floyd’s sister Bridgett Floyd walks past messages written by protesters as she leaves after speaking outside the Hennepin County Government Center after the first day of jury selection began in the trial of former Minneapolis Police officer Derek Chauvin who is accused of killing Floyd, March 8, 2021 in Minneapolis, Minnesota. – Jury selection was delayed on Monday, March 8 in the high-profile trial of white police officer Derek Chauvin accused of killing George Floyd, a Black man whose death was captured on video and sparked mass protests against racial injustice in the United States and around the world. As hundreds of protesters gathered near a heavily guarded Minneapolis courthouse, Hennepin County Judge Peter Cahill ordered jury selection put off until at least Tuesday. (Photo by CHANDAN KHANNA / AFP)