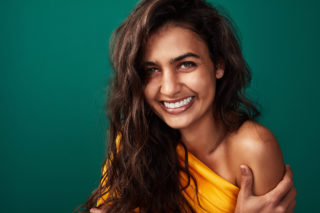 Shot of a beautiful young woman posing against a green background

Here’s one trend we didn’t expect to see emerging in the early months of 2021. Still, it seems that off-shoulder dresses and tops are making something of a comeback.

This renewed interest in the “cold shoulder” style is even more surprising since it appears to be rooted in the covid-19 vaccination drive.

Since January, certain clothing styles that haven’t been around in a while have started resurfacing in the wardrobes of fashion fans: namely, off-shoulder and one-shoulder dresses and tops. In the first two months of the year, clicks for off-shoulder dresses increased 68% compared to November and December 2020. Clicks for off-shoulder tops also increased by 63%, according to Stylight*.
For further proof, look no further than the Yves Saint Laurent dress worn by actress Lily Collins for the recent Golden Globes.

For the time being, the off-shoulder trend may not be all that visible on the streets of Europe’s fashion capitals, especially with much of the continent still experiencing wintry weather. But there’s another reason for that: the covid-19 vaccination campaign. This kind of clothing makes getting your shot quicker and easier, with no need to remove clothing.
In the US, the trend already has a name: “vaccine-ready” fashion.
*Stylight research is based on internal data from the platform’s 120 million monthly users in the 16 markets in which it operates.