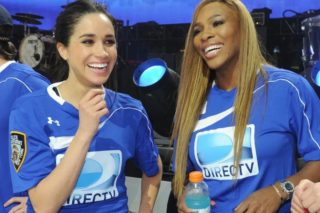 
Tennis legend Serena Williams has shared her support for her friend, Meghan Markle, after the broadcast of her interview with Oprah Winfrey and husband Prince Harry.

Meghan detailed her personal circumstances in the royal family to which Serena says, “her words demonstrate the pain and cruelty she experienced”.

From alleged racism, claims of “concerns” about how dark Archie’s skin tone would be, to character assassination from the press and the royal family, Meghan did not hold back.

The 23 times grand slam winner said she too had experienced racism and sexism in institutions where women of colour have been vilified and demonized.

“The mental health consequences of systematic oppression and victimisation are devasting, isolating and all too often lethal.”

Meghan is expecting her first daughter and Serena, mother of three-year-old Alexis Olympia, is a big advocate of women rights. She said she wants their daughters to live in a “society that is driven by respect”.

Markle, who acted on Suits, said her experience was so unbearable she contemplated taking her life, that she was lonely and lacked support. When Oprah asked her if she was driven to the verge of suicide, she said, “yes”.

Serena attended Prince Harry’s and Markle’s wedding in 2018 and the two have been friends for several years.

Suits co-star Patrick Adams shared a lengthy statement at the weekend criticising the media and the investigation into allegations Markle bullied her staff.

“It’s OBSCENE that the Royal Family, who’s newest member is currently GROWING INSIDE OF HER, is promoting and amplifying accusations of ‘bullying’ against a woman who herself was basically forced to flee the UK in order to protect her family and her own mental health.”

Meghan Markle and I spent the better part of a decade working together on Suits. From day one she was an enthusiastic, kind, cooperative, giving, joyful and supportive member of our television family. She remained that person and colleague as fame, prestige and power accrued.