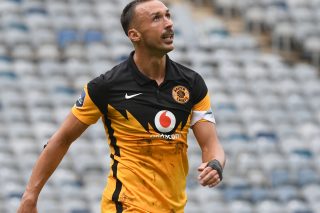 
Gavin Hunt is not sure if his striking duo of Samir Nurkovic and Leonardo Castro will be available again when Amakhosi take on Maritzburg United in the DStv Premiership on Wednesday at the Harry Gwala Stadium.

Chiefs are having a shocker of a campaign, though they did receive a boost on Saturday with a 2-0 Caf Champions League Group C win over Angola’s Petro de Luanda, their first win in three group games.

On the domestic front, Chiefs go up against their former head coach Ernst Middendorp on Wednesday, with Hunt’s side looking for a first league win since January 19, when they beat TTM 3-0.

“The strikers will be touch and go,” said Hunt on Nurkovic and Castro, after his team had beaten Petro on Saturday, through strikes from Erick Mathoho and Happy Mashiane.

The Chiefs coach could at least take solace from the fact that his side managed to hit the back of the net with out his two main marksmen.

“You have got to try something, we played Bernard (Parker) and Mashiane and we had a bit more movement. It looked ok. Sometimes in hardship these things come out. We knew on Tuesday we had a problem (with Nurkovic and Castro) but you never know until it goes into practice (a new line-up).”

Hunt will also have Ramahlwe Mphahlele available again, after the defender missed Saturday’s win through suspension, but Itumeleng Khune is likely to continue to miss out as he has been given compassionate leave after his sister passed away. “We have got to give Itu as much time as we can,” added the Chiefs head coach.

The win over TTM on January 19 was Chiefs’ third in a row in the DStv Premiership, and they looked then to have made a recovery from an abysmal start to the season that saw them win one of their first nine league games.

Instead, however, Chiefs have slumped again, unable to win any of their last five league games, while also suffering the embarrassment of an early Nedbank Cup exit at the hands of Richards Bay.

Middendorp and Maritzburg are still battling relegation, just a point clear of bottom side Black Leopards, and could do with a repeat of the result on January 9, when a Judas Moseamedi brace helped the Team of Choice stun Amakhosi 2-0 at FNB Stadium.

Middendorp’s side did beat Leopards 1-0 on March 2, following that up with a draw at Bloemfontein Celtic, though they will be missing the experience of Clayton Daniels, sent off against Celtic, for the Chiefs game.