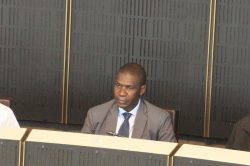 
The ANC Johannesburg region has lambasted Ndivhoniswani Lukhwareni, the former Johannesburg city manager whose termination was announced on Tuesday.

In a statement, ANC Johannesburg secretary Dada Morero said Lukhwareni was “running away from the responsibility and accounting for the mess he created in the city”.

“The ANC believes that Mr Lukhwareni has a case to answer for Herman Mashaba’s maladministration acts and failure to implement consequence management measures for the ramped corruption under his watch during the DA/EFF administration,” Morero said.

According to Morero, Mashaba’s “accomplice” had failed to act against those who involved in “increased unauthorised, irregular, fruitless and wasteful expenditure”.

Earlier on Wednesday, the ANC Johannesburg caucus said Lukhwareni’s exodus was for the good of service delivery, while the official opposition has vowed to oppose the golden handshake meted out by mayor Geoff Makhubo.

ANC chief whip in the metro Solly Mogase said the caucus welcomed the decision because it ended an impasse that was hindering service delivery. Lukhwareni simply not being good at his job, Mogase said.

Lukhwareni, who was appointed by the administration of Mashaba, was allegedly at odds with the ANC administration over his refusal to sign off on certain financial reports.

Morero said they were concerned that Lukhwareni was being allowed to go without any consequences for his actions of “improper conduct and maladministration”.

“We call upon the executive mayor Makhubo to ensure that criminal actions be taken against Lukhwareni. We further call on whoever is appointed to act as the city manager to urgently deal with those who are found to have violated procurement prescripts as far as Covid-19 emergency procurement is concerned.”