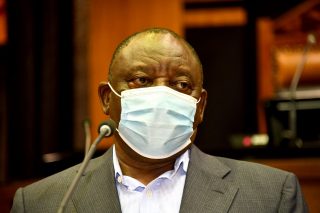 
President Cyril Ramaphosa on Thursday lamented the “personal insults” and “mudslinging” by MPs during the debate this week on the State of the Nation Address (Sona).

Addressing the joint sitting of Parliament, Ramaphosa welcomed the contribution and criticism made by MPs but said some of the insults were unwarranted.

“Members of Parliament have all the right to criticise and some of the criticisms were laced with personal insults, which I think it’s really not warranted and called for because this is a house which our people take very seriously, where we should engage in a very serious manner on national issues,” Ramaphosa said.

“Much of what we have heard from the opposition benches over the last two days was little more of name-calling and mudslinging.

“But all I can say to all the members of this house is that we will overcome and find it in ourselves to work together to overcome this pandemic,” he added.

The president said some of the speakers during the debate focused on the negatives instead of looking at the country’s strengths and capacities.

“Sometimes we forget about what we have on the asset side of our balance sheet. We forget about the many endowments that we have as a nation. We focus and spend a lot of energy on the negatives,” he said.

“And yet if we step back and look at what is it we have as our strength – and we’ve got many strengths – these are strengths that we should find time to capitalise on.”

Ramaphosa said contributions by MPs would enrich the national discourse and fortify the government’s response to the challenges the country faces.

“Particularly those who dealt with what I would call the substantive issues of national importance, issues that we are facing today.

“We welcome the many valuable contributions and suggestions. And where they were sincere, practicable, and constructive we will take them to heart and see how best they can be taken up.”

The president dismissed some of the criticism by those in the opposition benches who had slammed the government’s response in tackling the Covid-19 pandemic.

He said the rollout of the single-dose inoculations of the Johnson & Johnson Covid-19 vaccine to healthcare workers represented a new era for SA.

“Yesterday [Wednesday], this great and hopeful nation devastated by a deadly pandemic lifted its head, straightened its back, and welcomed a new era in our fight against the pandemic.

“Many said we had either the ability or the will to protect lives, and yet here we are on the threshold of a new era in our fight against the pandemic. This pandemic has almost become our enemy number one, but we have a number of other tasks that we have to address,” Ramaphosa said.

He also hailed nurse Zoliswa Gidi-Dyosi who was the first South African to be inoculated at Khayelitsha District Hospital.

“She like many others, have been in the frontline willing to even sacrifice their own lives so that all of us could live.”