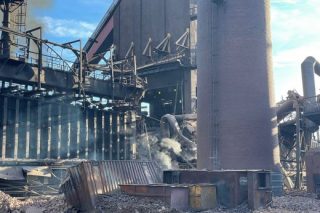 
Three employees who were missing after a building collapsed on top of them at ArcelorMittal’s Vanderbijlpark Works have died, the National Union of Metalworkers of South Africa (Numsa) confirmed on Thursday morning.

“This is devastating news especially for the families of the victims of this terrible incident. They have been waiting and anxiously hoping that their loved ones would be found alive. Unfortunately, that was not to be,” said the union’s Sedibeng regional secretary, Kabelo Ramokhathali, in a statement.

This after a portion of a 90-metre stack caved in and fell onto a coke battery control room in which the three employees were working in the early hours of Wednesday morning. The steel producer said the cause of the incident was not yet known and will be investigated, but Numsa claimed this was caused by an explosion.

“A full investigation will follow to understand what happened and avoid anything like this from happening in the future,” said ArcelorMittal South Africa’s CEO Kobus Verster on Wednesday.

Numsa has sent condolences to the family and friends of the workers who have passed away. The union also called on the Department of Employment and Labour to conduct a thorough investigation into the cause of the incident.

“We have a long painful history with ArcelorMittal and its brutal management which has demonstrated time and time again that Black Lives do not matter. This is the same management which previously dismissed a Numsa shop steward for exposing poor health and safety protocols in the company,” Ramokhathali said.

Ramokhathali accused ArcelorMittal South Africa of failing to take urgent action in conducting a search operation for the workers.

He said the company “dragged their feet and it took the pressure of the union and public pressure from the media to get them to take this more seriously.”

“We also want to thank the men and women who worked tirelessly to ensure that these bodies were located. We are convinced that had it not been for the intense efforts of workers themselves, who risked their own lives and took the initiative searching through the massive pile of rubble to locate workers who were trapped under the building, we would not have been able to recover these bodies.”

READ NEXT: Steel shortage: small factories are on their knees