Ramaphosa, Mkhize to join healthcare workers to get first vaccine jabs – The Citizen 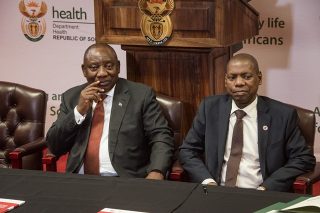 Ramaphosa said he and Health Minister Dr Zweli Mkhize would join the first healthcare workers to receive the vaccine in Khayelitsha, Cape Town, to demonstrate their confidence in the jabs.

This follows the arrival of the first consignment of 80,000 shots of the J&J vaccine on Tuesday evening at the OR Tambo International Airport. South Africa has secured nine million doses of the vaccine and an additional 500,000 doses are expected to land on home soil in the next four weeks.

UPDATE: WATCH: ‘I really did not feel much pain’ – Ramaphosa gets vaccinated for Covid-19 in Khayelitsha

Ramaphosa said the J&J vaccine, which has been approved by the South African Health Products Regulatory Authority (SAHPRA), would be rapidly dispatched to all nine provinces. He said most vaccination centres were expected to be ready to administer inoculations to healthcare workers from Wednesday.

“We are pleased that we are able to begin vaccination by mid-February, as we had announced. This is despite the fact that the AstraZeneca vaccine that we had procured for this purpose showed little efficacy against the 501Y.V2 variant that is currently dominant in South Africa,” Ramaphosa said in a statement on Wednesday.

Earlier this month, government halted the rollout of the one million Oxford-AstraZeneca vaccine that arrived from the Serum Institute of India (SII). This followed preliminary data that showed the vaccine gave minimal protection against mild-to-moderate infection caused by the 501Y.V2 variant discovered in South Africa last year.

The president has congratulated the Vaccine Inter-Ministerial Committee, the Ministerial Advisory Committee on Vaccines, Mkhize and his team, and the South African Medical Research Council (SAMRC) for responding rapidly and effectively to this challenge.

He said the J&J vaccine had been shown in extensive trials to be safe and efficacious, and would protect our health workers from illness and death from Covid-19.

“We have called on leaders in various sectors and parts of the country to lead by example and get inoculated publicly. We will therefore witness some premiers, MECs and leaders from civil society, religious formations and traditional leadership being vaccinated in all provinces,” Ramaphosa said.