How LaLiga became the best league in the world – The Citizen 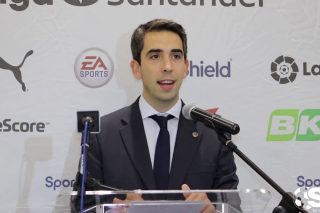 
LaLiga celebrates its 90th season in 2021/21, doing so as one of the best leagues in the world, a global phenomenon, and a true leader in the modern entertainment industry. But how did it come to be this international benchmark?

At what point did it become so much more than a simple football league and emblematic of a whole country? What’s the secret behind LaLiga clubs winning five of the last seven Champions League and 15 of the last 21 European trophies, or LaLiga players picking up each of the last 11 Ballon d’Ors?

LaLiga reflected on these questions, looking back on almost a century of competition to mark the 92nd anniversary of the first ever LaLiga game: RCD Espanyol 3-2 Real Union de Irun, played at 3.10pm at Sarria stadium in front of thousands of fans who each paid no more than a couple of pesetas.

The world has evolved no end since then, but LaLiga has adapted to the changing times, and at no time with more decisiveness and global vision than over the past decade.

Marcos added, “LaLiga is the league of the stars and every legend has played for the Spanish league, and the number of stars that have played in LaLiga is incomparable. Some players have also gone on to coach LaLiga teams and this speaks to how good the league is at producing and exporting the best football brains in the world”

On the field, Real Madrid and FC Barcelona have more often than not been the motor to push the league to new highs. Los Blancos have wowed the football world ever since the days of Alfredo Di Stefano and Santiago Bernabeu in the 1950s.

FC Barcelona, meanwhile, took a step up in the early 1990s, when Johan Cruyff’s Dream Team laid the seeds of how football would be played over the next three decades. Off the field, meanwhile, the league’s organisational structures evolved to provide ever-increasing support to the league’s sporting successes.

LaLiga as we know it today was founded in 1984 with this in mind, and the emergence of pay TV channels in 1996 saw the competition become known internationally as the ‘League of Stars.’ LaLiga has grown to dominate club football over the past 25 years, and in particular in the last decade thanks to the prolonged rivalry between Lionel Messi and Cristiano Ronaldo, two of the greatest players to ever play the game.

“LaLiga continues to grow in the past few years, even though some players have left, but there has been plenty of big players coming and going. A new star will arise, however looking at the present players the league is filled with quality players in all teams,” said the LaLiga Ambassador Luis Garcia.

The success of financial controls introduced in 2013 has also seen an ever-increasing balance emerge within the league, as has the collective rights sales model which was introduced two years later.

Speaking on the balance the of teams the league has witnessed, the former FC Barcelona and Atletico Madrid player said, “LaLiga has become an increasingly competitive, it’s not only a fight between the top teams but there are many strong teams now that can fight for the title.

This is all thanks to LaLiga through the implementation of progressive financial systems, and now many clubs are economically healthy thus their ability to spend money on new players, training facilities which makes it easier for teams to compete on an equal level.”

To these key moments in LaLiga history add in the greatest players and coaches in world football, iconic stadiums, historic clubs, fascinating stories, an international structure at the cutting edge of technology and countless goals, moves and moments which will live forever in the memory of fans all over the world… the result is a blockbuster production that 90 seasons on continues to offer excitement and emotion of the highest order.