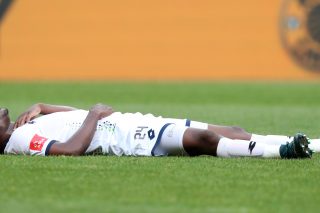 
Months have past now since Ennocent Mkhabela was released by Highlands Park with the midfielder slightly being forgotten in the football circles.

All he has at the moment is memories of his spells where football was his darling playing week in and week out.

Mkhabela’s career blossomed at the now dissolved Platinum Stars in 2011, then joined SuperSport United in 2013.

Big guns came calling for his signature and he subsequently signed with Kaizer Chiefs in 2016, but his spell with Amakhosi didn’t go as anticipated with injuries derailing his progress.

After recovering, the Mpumalanga born player struggled with game time and that’s when the Naturena based outfit decided to loan him out to Dikwena until 2018 during the end of the Rusternburug based outfit era. And that’s when the struggles to find a team started before signing with with Highlands the following year, only for the club to get sold to Tim Sukazi of TS Galaxy.

“I think I had my best years of football at SuperSport United and Platinum Stars, that’s where I enjoyed my football. It was great because I enjoyed plenty of game time. We won some trophies at Platinum as well as at SuperSport,” Mkhabela told Phakaaathi.

“At Chiefs injuries started, I was disappointed. But I had the support from family and I knew that it was not the end of my career. It was just unfortunate it had come to a point whereby I was out because of an injury.”

Having been home since last year in June, Mkhabela is not really bitter about what transpired at Highlands.

With a vast of experience of playing in top flight football, he understands that things like this do happen.

The 31-year old is looking to start on a clean slate and has been offered to come for assessment at GladAfrica Championship side Cape Town All Stars.

But he confirms that he recently lost his father and was forced to stay at home, but he will find out when he can go down to the Western Cape in a quest to resurrect his career.

“Such things happen in football, at the end of the day, I had to move on, it’s that I couldn’t fight. But it’s not the end for me. I recently got invited to be assessed by Cape Town All Stars, unfortunately my father passed away and I couldn’t go to Cape Town. I had to stay at home until the funeral arrangements have been done. I will be in communication with them to see when I can go and we will see what happens from there. But I believe in my abilities and I will do everything I can to impress.”