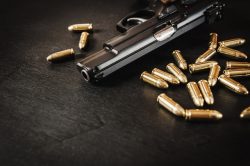 On Tuesday, the committee was scheduled to receive a final report on the number of firearms surrendered during the approved firearms amnesty for 2020-2021.

“This will ensure transparency and effective oversight by the committee on the work of SAPS,” said committee chairperson Tina Joemat-Pettersson in a statement.

The committee criticised the discrepancies in statistics and highlighted how these shortcomings affect its oversight work.

It also highlighted the implications of giving incorrect information to Parliament.

The committee raised serious concerns about the firearm licence backlog at the Central Firearms Registry (CFR).

“It is concerning that only 280 applications were processed for the 2020-2021 amnesty against 30,356 applications made. This, according to the committee, is an indictment to the work of SAPS,” Joemat-Pettersson said.

The committee suspended the meeting and demanded that SAPS reconcile its numbers to present an accurate representation of both amnesties.

The duo then has to table a report on the CFR’s challenges, as well as proposed plans to resolve it.

The meeting will be rescheduled for a later date and time, which will be communicated accordingly.