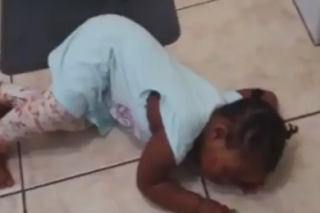 
Two-year-old Lerato may be on her way to stardom after a video of her playing dead to get out of trouble surfaced on social media.

In the video, Lerato – realising there was no way out after being caught writing on the bathroom wall – stares at her mother before pretending to be running out of breath, and on the floor she lands.

Being a kid, she forgot she was in character and got up in laughter.

According to her mother Amanda Moyo, the incident happened on Sunday after Lerato sneaked out of the room while the family was attending an online church service at their Ferndale home.

“I was looking for her and no one knew where she was. The bathroom door was closed, so I thought let me just check. When I opened the door, she was just there writing with my Estée Lauder lipstick which cost R495.

“I was shocked, I closed the door and went to get my phone. When I opened the door again she had quickly dropped the lipstick and was now carrying the cleaning loofah trying to clean the mess.

“I gave her the look parents give their children when they’re being naughty. I don’t know where that came from because she’s never done it before but I think at that moment she thought ‘have to pull a stunt, something, anything to get me out of this’.

“But then the baby brother laughed after she dropped down and she forgot that she was supposed to have fainted and then woke up laughing.”

At two years old, Lerato can switch on the laptop, log in and go to YouTube to watch her cartoons.

“We restrict what she can watch. I don’t know where the drama comes from but she’s the most dramatic queen ever. She gets up to something every single day and then she just looks at you with her big eyes,” said Amanda.

Though it’s something Amanda does not easily admit, her daughter takes after her.

“Apparently I was like that as a baby. I’ve become calmer now, but yeah, it looks like I put my parents through a lot when I was baby.