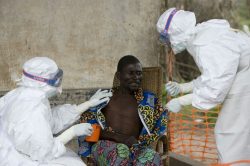 
Health workers in eastern Democratic Republic of Congo have begun an Ebola vaccination drive after four cases, two of them fatal, surfaced just three months after the country’s last outbreak of the disease, the UN said.

“The authorities today… launched an anti-Ebola vaccination campaign in Butembo just a week after the virus re-emerged,” the World Health Organization (WHO) said in a tweet.

“Workers at Matanda hospital, where the first positive case of Ebola was treated, were the first to be vaccinated,” it said.

The health ministry announced on 7 February that four women in Biene, in the troubled region of North Kivu, had fallen ill with the notorious haemorrhagic fever. Two have since died.

The WHO’s office in DR Congo said four people in Biene had been vaccinated and 334 other contacts would also receive the jab.

On November 18, DR Congo declared that the country’s 11th documented epidemic of Ebola was over.

The outbreak, in the northwestern province of Equateur, claimed 55 lives.

On Sunday, the West African state of Guinea said it had confirmed seven cases of Ebola — the first resurgence of the disease in the region since a 2013-2016 epidemic that killed more than 11,300 people.