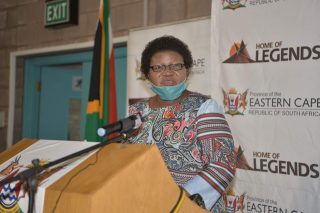 
Bobby Stevenson, the leader of the DA in the Eastern Cape, has added his voice to mounting calls for the province’s Health MEC Sindiswa Gomba to be sacked.

Gomba appeared in court on Friday, one of several ANC heavyweights in the Buffalo City Metro region, facing a string of serious charges including fraud, corruption, money laundering, and contravening the Municipal Finance Management Act.

The 15 suspects are accused of misleading the municipality into believing that it had an obligation to make funds available for the funeral and memorial service of former President Nelson Mandela in December 2013.

According to the charge sheet, once R10 million was made available, the suspects acted with common purpose to defraud and manipulate municipal procurement processes through illegal deviation.

Further to that, to manipulate the situation so that funding could be used for purposes other than for what they officially were approved for.

The accused were each released on R1,000 bail and the case was postponed to 5 March for the defense to be furnished with copies of the docket, and for four outstanding suspects to be brought to court and added to the case.

Call for Mabuyane to act

Speaking on Monday, Stevenson said Eastern Cape Premier Oscar Mabuyane couldn’t call for the likes of ANC Secretary-General Ace Magashule, who is facing criminal charges, to step aside, while not acting on the situation in his own backyard.

On Friday, Mabuyane said he had noted Gomba’s court appearance and the charges brought against her. He said he took the matter very seriously and would decide on it.

The ANC Provincial Working Committee (PWC) said it would meet soon to deliberate and decide on Gomba, and other ANC members accused in the case.

Stevenson said: “No amount of noting developments and looking into the matter is going to change the fact that EC Health MEC, Sindiswa Gomba, is facing a string of charges including fraud, corruption, money laundering and contravening the Municipal Management Finance Act.

“The longer he takes to act, the more damage is being done to the name of the Eastern Cape, entrenching the view that this province is the epicentre of corruption.”

DA provincial legislature member and shadow health MEC Jane Cowley said it was necessary that Gomba step aside in order to allow for the work of the department to continue without the accompanying drama as scandal upon scandal piles up against Gomba.

The DA, EFF, and health workers’ union Nehawu are united in the call for Gomba to go.

Nehawu provincial secretary Mickey Jaceni said Mabuyane should not miss the opportunity to demonstrate to the public that misappropriation of public funds will not be tolerated.

“We strongly believe that the MEC should be relieved of her duties with immediate effect.

“The people of the Eastern Cape cannot have an MEC who is facing such heavy charges while she is also expected to lead the provincial Department of Health especially at a time when we are faced with the Covid-19 pandemic which requires all hands on deck to decisively defeat,” said Jaceni.

“The Eastern Cape as a province has a reputation of being one of the most corrupt in the country.

“The province is characterised by a blatant disregard for the rule of law as laws enacted to safeguard the public purse are treated with disdain as those responsible for looting are never brought to book.

“This case in particular highlights the moral decay that is currently plaguing the former liberation movement as those responsible for embezzling funds used the funeral of an upright man and statesman.”

Called for comment, Gomba said she was a deployee of the ANC and therefore the party would be best to respond to the calls for her sacking.