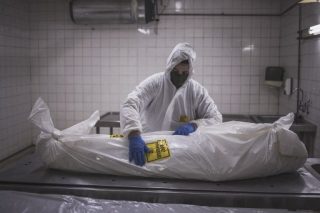 
South Africa’s official Covid-19 statistics show a steady decline after the second wave of the pandemic was fuelled by a mutation in the virus, discovered towards the end of last year.

On Sunday, Health Minister Zweli Mkhize announced that 1,744 new cases, and 78 additional deaths, had been reported n the preceding 24 hours.

As a result, the country is now heading towards the 1.5 million confirmed case tally with a total of 47,899 deaths.

KwaZulu-Natal has the most number of active cases at 18,802, followed by the Western Cape with 8,624.

Prime Minister Boris Johnson on Sunday called Britain hitting a target of inoculating 15 million of the most vulnerable people with a first coronavirus jab “a significant milestone”, as the country prepared for the next phase of its vaccination programme.

Johnson, who has faced severe criticism over his year-long handling of the pandemic, had set the ambitious aim of offering a jab to everybody in the top four priority groups of around 15 million people by the middle of this month.

That comprises all over-70s, care home residents and staff, NHS workers and the extremely clinically vulnerable to the virus.

By the end of Saturday, 15,062,189 people had received a first dose, with 537,715 also getting their second shot, according to the latest health ministry statistics.

“This country has achieved an extraordinary feat,” Johnson said in a video message posted on Twitter, noting it had been just over two months since Britain embarked on its biggest ever vaccination programme.

“We’ve still got a long way to go to. And there will undoubtedly be bumps in the road. But after all we’ve achieved, I know we can go forward with great confidence.”

The country will now start administering vaccines from Monday to those aged between 65 and 69 and the clinically vulnerable to Covid-19, with almost 1.2 million already invited to book their jabs, the state-run National Health Service (NHS) said.

Ministers have also vowed to vaccinate all over-50s by May and all adults by September.

“There is so much more to do and I urge anyone eligible to step forward and take up their appointment,” Health Secretary Matt Hancock added Sunday.

“The vaccine is our route to freedom — we will beat this virus jab by jab.”