Real Madrid finding rhythm after strolling past Valencia – The Citizen 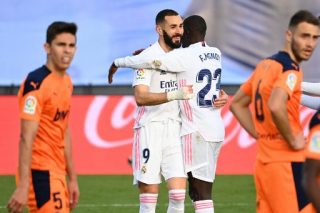 
Real Madrid appear to be gaining momentum ahead of the Champions League knockout stage, with a 2-0 win over Valencia on Sunday putting them back within sight of La Liga leaders Atletico Madrid.

Valencia were in the last 16 of Europe’s premier tournament last season too but their plummet from the elite was exposed by Zinedine Zidane’s team, who strolled to victory at the Alfredo di Stefano Stadium.

Karim Benzema and Toni Kroos had Madrid two up at half-time while left-back Ferland Mendy stabbed in a third that was ruled out for offside. Such was Madrid’s comfort, Zidane was able to withdraw key players in the second half.

There was certainly never any prospect of a comeback from Valencia, who were flat and almost accepting of a defeat that leaves them only three points above La Liga’s relegation zone.

In all likelihood, there will be three worse teams than Valencia come the end of the season but the dismantling of the squad under owner Peter Lim has made survival far from a guarantee.

Madrid’s own title ambitions looked to be over when they were beaten by Levante at the end of the last month but three wins on the bounce since then have raised some hope of a comeback.

Atletico remain five points clear of their city rivals, having played two games fewer, and it will take a significant dip from Diego Simeone’s side for the title race to open up.

At the very least, Real Madrid seem to be finding some rhythm and if La Liga proves a step too far, perhaps they will focus more on the Champions League, where they have so often delivered when it matters.

Atalanta will offer a much sterner test in the last 16 and Zidane will have been disappointed to see Dani Carvajal trudge off injured after just 25 minutes in his first game back following a groin strain.

With Sergio Ramos also out, Nacho Fernandez continued at centre-back while Eden Hazard’s latest absence gave Vinicius Junior a chance in the front three, with the Brazilian enjoying one of his better afternoons along with Benzema and the resurgent Marco Asensio.

If Hazard is able to recover in time for the first leg against Atalanta on February 24, Zidane will have to decide whether to throw the Belgian straight back into his line-up, with Vinicius now an obvious alternative.

Valencia also never got to grips with Madrid’s midfield three, the veteran duo of Kroos and Luka Modric producing the kind of performance that have persuaded Zidane to keep faith for so long.

It was Kroos’ first-time pass that set Benzema away in the 12th minute, the Frenchman cutting inside onto his right foot and curling around Gabriel Paulista and inside the far post.

Madrid’s second goal was brilliantly worked, with Lucas Vazquez playing wide to Asensio before continuing his run into the box. Asensio fed Modric, who pulled back for the surging Vazquez, with a rolled pass across allowing Kroos to clip into the corner.