Ramaphosa lays down the law in Zuma vs Zondo – The Citizen 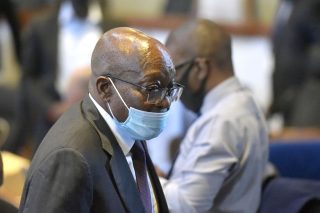 
ANC President Cyril Ramaphosa has set himself up squarely against the Jacob Zuma faction in the ruling party, saying that he will lead the Congress’ presentation at the Commission of Inquiry Into Allegations of State Capture.

In his closing address to the ANC’ National Executive Committee’s meeting over the weekend, Ramaphosa said the party “unreservedly urge our members and all South Africans to cooperate with the commission”.

This as Zuma is set to appear before the commission chaired by Deputy Chief Justice Raymond Zondo on Monday after a Constitutional Court ruling compelling him to do so.

“The Commission has set aside the week of 15-19 February 2021 for the hearing of the evidence of the former President Jacob Zuma and the Chairperson, evidence leaders and all relevant Commission personnel will be at the hearing venue on Monday, 15 February 2021 at 10:00,” the commission said in a statement on Sunday.

Zuma has vowed not to appear before the Commission in spite of the highest court’s ruling for him to do so. He faces arrest if he fails to show up.

In addition, several structures including the Umkhonto weSizwe Military Veterans Association (MKMVA), and the ANC in KwaZulu-Natal, have publicly backed the former president, with some saying that they would physically protect Zuma from arrest.

In is closing remarks, Ramaphosa said: “The Constitution and the rule of law are sacrosanct components of our democracy and all people in the country must respect these principles. To allow anything else would be anarchy and open the floodgates easily for counter-revolution. Corruption and state capture, as well as lawlessness, are against the core principles and values of the ANC.”

In leading the party’s representation before Zondo, Ramaphosa said, he will “use the opportunity to unequivocally reaffirm the position of the ANC against corruption and state capture, and its impact of the people and the country”.

Also on the agenda over the weekend was the guidelines regarding ANC members implicated in unlawful activities to ‘step aside’ while their accusations were being heard.

This as the party’s Secretary-General Ace Magashule is out on bail facing serious corruption charges.

The former Free State Premier has so far dismissed all attempts for him to step down from his role while his court case unfolds.

However, the NEC meeting once again did not come to a clear resolution on this matter.

The NEC adopted guidelines headed by ANC Treasurer General, Paul Mashatile and his team. This document will now be “refined”.

Ramaphosa said that implicated individuals should “act voluntarily without compulsion from the movement’s structures”.

He said implicated ANC members should act in the interest of the party to step aside while facing charges.