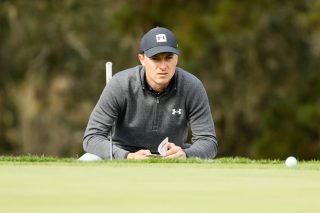 
Jordan Spieth stepped up his quest for a first US PGA Tour title in more than three years, firing a five-under par 67 on Friday to take the halfway lead in the Pebble Beach Pro-Am.

Spieth, who hasn’t won since capturing his third major championship at the 2017 British Open, had four of his six birdies on his inward run at Spyglass Hill, the course playing tougher of the two in use over the first two rounds on the Monterey Peninsula.

Spieth had a 12-under par total of 132, one-shot in front of fellow American Daniel Berger, who carded a six-under par 66 at Pebble Beach Golf Links for 11-under 133.

“I’m in great position after the midway point,” said Spieth, who finished tied for fourth last week at Phoenix with the aid of a third-round 61.

“(I) feel a little bit improved off of last week, which was the goal this week, to just try and feel like I’m getting better each day,” Spieth said.

He followed his only bogey of the day at the first with birdies at the fourth, fifth, seventh and eighth, holing a 40-foot putt at the fifth.

“From 40 feet it’s not, like, cake if you see the read, but to know what it would do up the slope and then after, it was really nice to get a read. The hole caught it on the right side. That was the longest putt I’ve made in two days and certainly a steal there.”

Spieth said the fact that he hasn’t needed a lot of long putts “is probably a really good sign, that I’m keeping the ball in front of me and striking it really nicely.”

Berger had a chance to join him on 12-under but settled for a par at the final hole of a round that included five birdies and a chip-in for eagle at the sixth.

“I hit a great drive,” Berger said of the sixth, where he “just got a little unlucky” with his four-iron second shot before hitting “a perfect chip.”

He sandwiched the eagle between birdies at the fifth and seventh, draining 15-footers at each.

“I think it’s hard to have a bad day at Pebble,” Berger said. “It’s one of those courses when you walk you just kind of enjoy it.”

– ‘Mean Pebble’ -But Spieth cautioned that in the windy, wet weather predicted for Saturday, “Pebble’s going to be Mean Pebble.”

“I look forward to that challenge,” Spieth said. “It’s going to be fun to go out there and have to hit some kind of different level shots than when we played in the desert last week.”

Sweden’s Henrik Norlander was alone in third heading into the weekend, posting a two-under 70 at Spyglass for a 10-under total of 134.

England’s Paul Casey had six birdies in a five-under 67 at Pebble Beach to join compatriot Tom Lewis on 135. Lewis posted a 69 at Spyglass.

They were joined by overnight leader Patrick Cantlay, who was coming off an impressive 62 at Pebble Beach but opened with a double-bogey on the way to a one-over 73 at Spyglass.