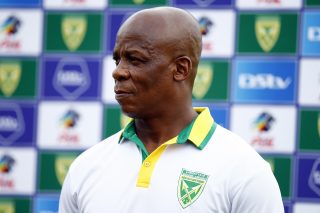 
Lamontville Golden Arrows coach, Mandla Ncikazi had nothing but good words to say about his striker, Michael Gumede who bagged a brace when they beat Stellenbosch FC 3-1 in a DStv Premiership match on Friday.

Abafana Bes’sthende showed their resilience and overcame a slow start to score an early goal through man of the moment and probable player of the month, Pule Mmodi.

Gumede scored his brace in the second half, ensuring the Durban side’s tally of points rises to 28, and they climb to third place in the standings with SuperSport United in front only on goal difference.

“I’m happy for Michael… He’s been through a lot in his personal life lately,” said Ncikazi after the game. “I am happy that he scored two goals today (Friday). He’s still humble as ever and hard working as always.

“They have an understanding with Knox (Mutizwa) and they are sharing the scoring responsibility between them, and it’s good for the team to have its strikers working hand in hand. I just hope they continue doing that so that other players can learn from them,” added Ncikazi.

The mentor, who was born some 51 years ago in the dusty Hlokozi, on the KwaZulu-Natal north coast, said their first goal was key in them wrestling the match from a stubborn Stellies side.

“I don’t think we had the best starts. But we were fortunate that we scored first. After scoring I thought we created more chances as the game had became a little easier.

“This is why at half time I had a talk with the team to say, ‘listen, if there is an opportunity to win and score, win and score so that there are no regrets at the end of the match that we had the chances but we didn’t win it.

“I thought we adapted well in the second half and we again scored first… they then came at us and we were rattled a little when the score was 2-1 but after that I also thought we could have scored more.

“We want to keep pushing and see where this takes us,” said Ncikazi who is in his first full season as coach.

He took over from Steve Komphela who resigned just before the start of the season to take up a more lucrative job at Mamelodi Sundowns.