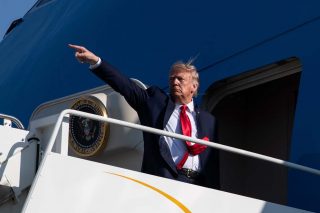 
Donald Trump’s impeachment defense team on Friday turned the tables on Democrats arguing that the former president incited violence by urging supporters to ‘fight like hell,” showing a lengthy montage of Democratic politicians using the word “fight” to galvanize their own backers.

The video, which ran more than 10 minutes, showed many Democratic senators, along with President Joe Biden and Vice President Kamala Harris when they were on the 2020 campaign trail, using the word hundreds of times in speeches and on TV.

“Every single one of you, and every one of you,” Trump’s lawyer David Schoen said, pointing at lawmakers and the House members prosecuting the case against Trump.

“That’s OK, you didn’t do anything wrong. It’s a word people use,” Schoen told them.

“But please, stop the hypocrisy.”

The Democrats featured in the video were shown speaking in the Senate and House chambers, at campaign rallies, in TV studios, on convention stages and in acceptance speeches.

Lawyers for the Republican former president – who stands accused of inciting violence with a fiery January 6 speech before his supporters stormed the Capitol – argued that such provocative language is just animated political speech.

“You don’t get what you don’t fight for,” Senator Elizabeth Warren says in a clip, one of 47 times she is shown using the word.

The montage also featured clips of the House lawmakers acting as prosecutors in the Senate impeachment trial calling for a “fight” against Trump on various issues.

Democrats will “fight him and challenge him in every way that we can, in the Congress, in the courts and in the streets,” congressman Joaquin Castro was heard saying.

The images concluded with Biden himself rallying his supporters: “Never, never, never give up this fight.”

Over two days of arguments, House prosecutors have repeatedly played video of excerpts of Trump’s January 6 speech, which they said incited his supporters to march down Pennsylvania Avenue and besiege the US Capitol.