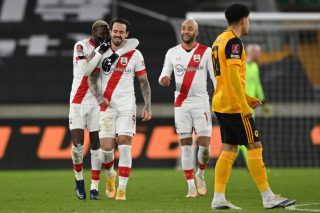 
Southampton put their miserable Premier League form behind them to reach the FA Cup quarter-finals with a 2-0 win at Wolves on Thursday.

Goals from Danny Ings four minutes into the second-half and Stuart Armstrong in stoppage time offered some relief for Ralph Hasenhuttl’s men after four consecutive league defeats, including a 9-0 thrashing by Manchester United.

Hasenhuttl was rewarded for naming a stronger side than Wolves boss Nuno Espirito Santo, who made six changes.

Ings had fortune on his side to open the scoring when he broke through and, although his shot was saved by John Ruddy, it came back to hit the England striker and roll in.

Armstrong sealed the game when he curled in after Ruddy made a mess of Leander Dendoncker’s back pass.

Chelsea or Barnsley will complete the quarter-final line up later when they meet at Oakwell.

Southampton’s reward is a south coast derby against Bournemouth in the last eight.

Sheffield United will travel to the winners of the Chelsea and Barnsley tie.