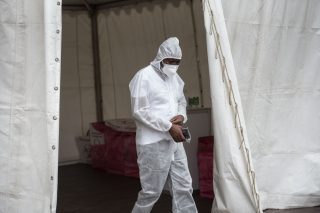 The World Health Organization warns of a “false sense of security” in Europe, saying most of its nations were still vulnerable despite a fall in cases.

Slovenia announces a partial lifting of coronavirus restrictions from next week, including the reopening of elementary schools and an end to travel bans around the country.

The arthritis drug tocilizumab reduces the risk of critically ill patients dying of Covid-19, according to results of a study by the Britain-based RECOVERY research programme investigating Covid-19 treatments.

The programme said research on the drug had shown “a reduction in the risk of death of around about a sixth or a seventh”.

Covid-19 deaths in Africa have increased by two-fifths in a month, the WHO says, sounding the alarm for a continent faced with more contagious variants.

Most African countries should still roll out the Oxford/AstraZeneca vaccine despite questions over its use against the South African variant, the Africa Centres for Disease Control and Prevention (Africa CDC) watchdog says.

US President Joe Biden’s administration ships a million vaccine doses to around 6,500 drugstores and supermarket pharmacies nationwide, with several chains announcing they will begin giving out the first shots Friday.

Zimbabwe will receive 800,000 vaccine doses developed by China’s Sinopharm by the start of March, the government says as it prepares to launch its immunisation campaign.

Dubai has had to implement a “surge” in its healthcare capacity, a senior official tells AFP, as infections rise in one of the first destinations to reopen to tourism last year.

The G7 will consider whether to use the IMF to mobilise $500 billion in aid to the world’s poorest nations to respond to the pandemic, a French source says ahead of a virtual meeting of the group’s finance ministers and central bankers on Friday.

Instagram blocks Robert F Kennedy Jr, the nephew of the assassinated president JFK, “for repeatedly sharing debunked claims” about the coronavirus or vaccines.

The virus has killed at least 2,355,410 people since the outbreak emerged in China in December 2019, according to a tally from official sources compiled by AFP on Thursday.