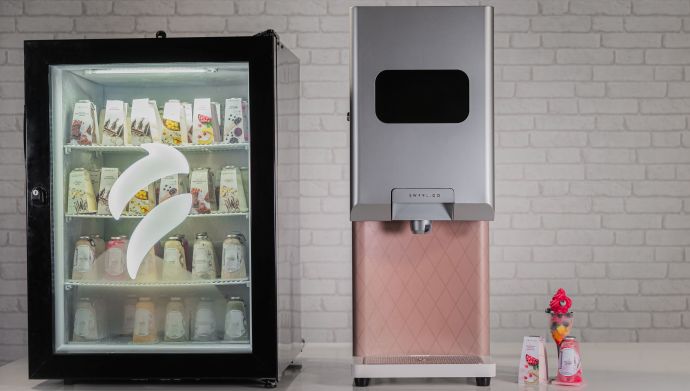 Inspired by the Nespresso coffee machine, Jeremy Tan, a former management associate of Singtel and a foodie at heart, decided to build something similar –but for desserts.

He launched Advantir Innovations in his home country Singapore after he noticed a major problem in the conventional ice cream machines. Based on his observations, the existing traditional models were bulky, inefficient, expensive, and most importantly, limited in flavour options.

He attributes this to the fact that the ice-creams are created within the machine, which is why only a few businesses with high traffic could afford to buy it.

“One has to spend a five-sum-figure to buy a desert machine that is only able to create soft serves with limited flavours. That, to me, did not make sense,” he expresses.

Like most innovators, Tan saw an opportunity to build a much sleeker, efficient, and cost-efficient version of the machine.

So instead of manufacturing the ice-cream within the machine, he decided to partner with ice cream manufacturers so that it would be much cheaper to produce more flavours.

He built something similar to a Nespresso machine that would allow people to create a wide variety of dessert experiences for themselves out of a simple capsule. After spending about two years since its inception in ideation, prototyping, and road mapping, Tan finally commercialised his product in 2020. It now has several patents pending in seven markets.

Advantir Innovation’s flagship product is Swirl Go, an ice cream-making capsule that makes sure that consumers get their favourite flavour dispensed at its finest quality.

The way that it works is that consumers pick their ice cream flavours out of a wide variety of options (also known as Swirl pods) and insert it into the machine. The machine then churns it out at its optimal consistency. Once this process is done, the user then presses a button on the touchscreen and the ice cream is dispensed into a cup or a cone for the customer to enjoy.

According to Tan, there are plenty of algorithms in place to ensure that the particular flavour of the specific brand is dispensed at its best consistency. This means that different flavours have different blends and mixes.

“The whole process takes less than a minute, so it’s actually really simple for them to serve themselves. There’s no cleaning or washing that happens between the dispense because there’s no food contact with the machine. So that’s a key element of how our design approach works,” he says.

Currently, the capsules are selling at two rates. The company implements a rent-to-purchase model (which is similar to leasing) at US$195 per month whereas the loan-with-purchase is sold at US$262, according to the website.

As of now, the startup has completed trial deployments with offices, hotels and restaurants and claims to have generated a considerable amount of interest from overseas clients.

“We’ve seen interest from the Middle East and East Asia with the goal to create a wide variety of premium desserts with very low manpower. We have quite a few businesses that have reached out to us to indicate their interest, so that’s something really exciting for us now,” Tan explains.

Tan believes that Swirl Go will definitely be attractive to not only cafes and restaurants, but also to offices and co-working spaces.

While the machines are currently offered only to B2B consumers, Tan plans to offer a “miniaturised” version of the machines to the general mass, in addition to producing machines for businesses. This machine is scheduled to launch by the end of 2021.

In an interview with TechInAsia, he mentioned that his goal is to make the capsules much more environmentally-friendly by using less plastic and making recyclable capsules.

The company has also disclosed plans of possibly expanding its reach to a wider number of desserts such as pastries and waffles.

Last month, the startup raised an undisclosed seven-figure USD in seed funding. Raging Bull Investments led the round along with participation from she1K Global, Expara Asia Ventures, Azerus, and other angels.

The post This startup lets you create over 100 premium ice cream out of a mini capsule appeared first on e27.