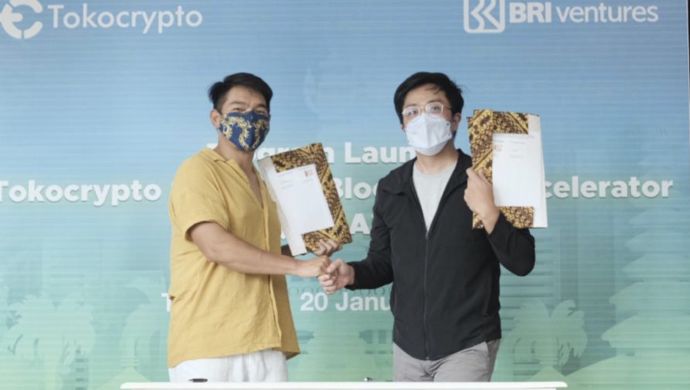 Following up on the launch of TokoLaunchpad Version 2.0 in 2021, Indonesia-based Tokocrypto collaborated with BRI Ventures –through its Sembrani Wira Akselerator initiative– to launch Tokocrypto Sembrani Blockchain Accelerator (TSBA). This programme is meant to empower blockchain and tokenisation projects in the country.

Tokocrypto CEO Pang Xue Kai named the collaboration a milestone for the company as it successfully gained the trust of a CVC under a leading state-owned bank in Indonesia. He hopes that this accelerator programme can help develop the ecosystem and create a positive impact on the Indonesian blockchain and startup ecosystem.

“We hope that this collaboration will accelerate the development of Web3 initiative and the growth of metaverse ecosystem, especially since we already have two growing venture capital funds: Sembrani Nusantara and Sembrani Kiqani which focuses on investments in non-fintech sectors,” BRI Ventures CEO Nicko Widjaja in an official statement.

The accelerator and its criteria

Through TSBA, the two companies intended to form an accelerator programme that provides an extensive module specially designed to launch blockchain projects and startups to the global stage. This programme includes the various aspects of developing the blockchain technology itself, the economic values or tokenomics, team culture formation, mentorship/guidance for listing and fundraising.

The programme requires participating startups to have secured at least an early stage funding. The company is also required to develop its own blockchain technology or have a working product or a white paper.

Markus Liman Rahardja, VP of Investment dan Business Development at BRI Ventures, who was also present during the MOU signing in Bali on January 20, highlighted the two aspects of fundraising that will be the focus of BRI Ventures: crypto and venture fundraising.

Providing a hub for crypto enthusiasts

In 2021, Tokocrypto launched several initiatives to develop the crypto asset ecosystem in Indonesia. Starting from launching its own token TKO in April, NFT marketplace TokoMall in August, to supporting the Bekind movement in developing various CSR programmes through TokoCare.

With the launch of TSBA, Tokocrypto officially introduced T-Hub in Batubelig, Bali, as an educational and social platform to develop the crypto ecosystem in Bali. The startup has previously launched a similar concept in Senayan, Jakarta.

Outside of TSBA, there are already several startups or projects that are participating in TokoLaunchpad. Some of it included Play it Forward DAO, Avarik Saga and Nanovest. Kai also named more than 15 startups and projects that are currently in talks to join the initiative.

The article was written in Bahasa Indonesia by Kristin Siagian for DailySocial. English translation and editing by e27.