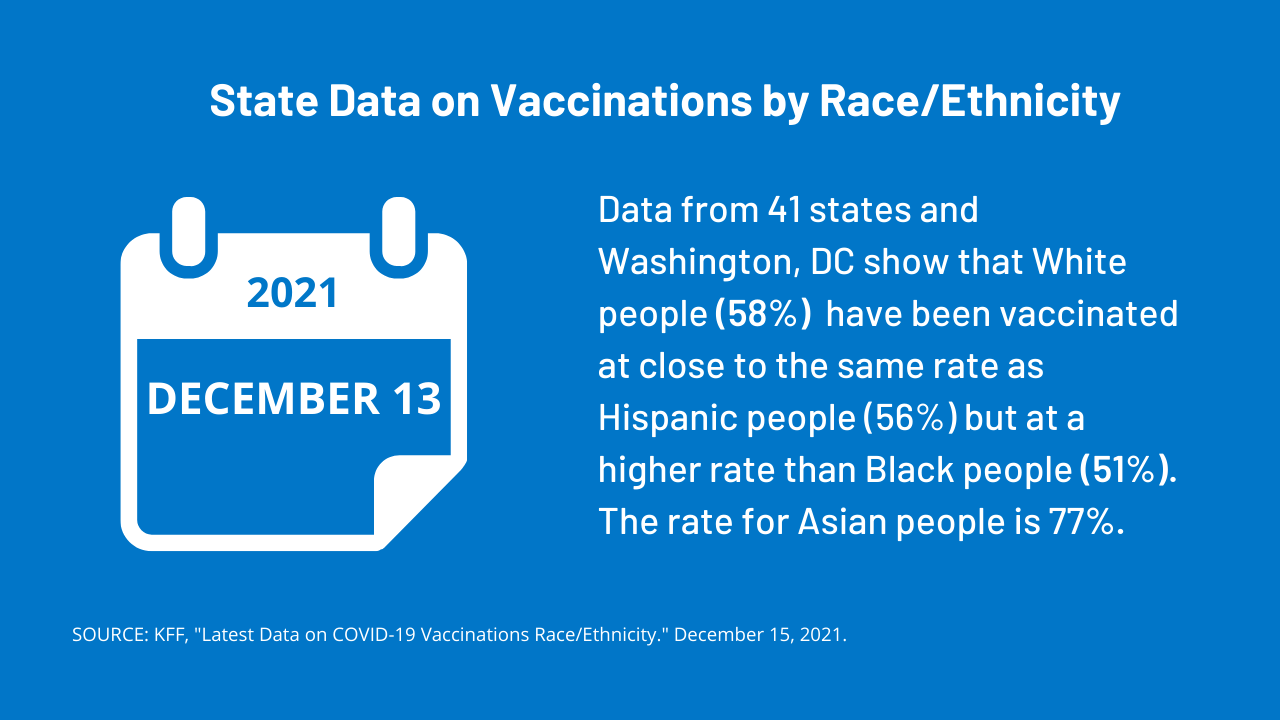 
As of this week, federal data from the Centers for Disease Control and Prevention (CDC) show that 72.1% of the total population in the United States have received at least one dose of a COVID-19 vaccine. While this achievement has led to steep declines in COVID-19 cases and deaths, vaccination coverage—and the protections provided by it—remains uneven across the country. Amid the continued spread of the Delta variant and growing concerns related to the Omicron variant, unvaccinated people are at increased risk for infection, illness, and death. As of December 13, 2021, White people accounted for the largest share (63%) of people who are unvaccinated.1 Over the course of the vaccination rollout, Black and Hispanic people have been less likely than their White counterparts to receive a vaccine, but these disparities have narrowed over time, particularly for Hispanic people. With booster shot eligibility expanded to all individuals ages 16 and older and children ages 5-11 eligible for vaccination, ensuring equity in take-up of booster shots and vaccinations among children also is important. However, to date, limited data are available to examine disparities among booster shot recipients and children.

While these data provide helpful insights at the national level, to date, CDC is not publicly reporting state-level data on the racial/ethnic composition of people vaccinated. CDC also is not reporting the race/ethnicity of people who have received at least one dose by age, limiting the ability to gain insight into vaccination patterns among children.

Across these 42 states, as of December 13, 2021, 58% percent of White people had received at least one COVID-19 vaccine dose, which was close to the rate for Hispanic people (56%) but higher than the rate for Black people (51%). White people had a vaccination rate that was higher than the rate for Hispanic people in 27 states, while it was lower in 15 states. White people had a higher rate than Black people in most reporting states, except Oregon, Alaska, Alabama, Mississippi, Pennsylvania, Utah, Washington, Louisiana, and West Virginia. The size of these differences varied widely across states, and they have been narrowing over time. The overall vaccination rate across states for Asian people was higher compared to White people (77% vs. 58%), which is consistent with the pattern in most reporting states. However, Asian people had lower vaccination rates than White people in four states (Colorado, North Dakota, Pennsylvania, and South Dakota).

State Data on COVID-19 Vaccinations for Children by Race/Ethnicity

CDC reports that as of December 13, 2021, 19.2% of children ages 5-11 and 62.1% of children ages 12-17 have received at least one COVID-19 vaccine dose. However, CDC does not currently report race/ethnicity of vaccinated children. As of December 10, 2021, only nine states reported COVID-19 vaccination data by race/ethnicity for children: Connecticut, the District of Columbia, Kansas, Michigan, Minnesota, North Carolina, South Carolina, Wisconsin, and Vermont (Figure 4). While these states report race/ethnicity of vaccinated children, they vary in their racial/ethnic categorizations and age groups, making it challenging to compare vaccination rates data across states. Seven states (Connecticut, District of Columbia, Michigan, Minnesota, North Carolina, South Carolina, and Vermont) reported race/ethnicity data separately for children ages 5-11, the group who most recently became eligible for the vaccine.

The data from these nine states have mixed findings regarding vaccinations by race/ethnicity among children. Black children had lower vaccination rates than White children in most but not all of the reporting states. Asian children had the highest vaccination rate in most reporting states. Rates for Hispanic children were lower than rates for White children among those in the age 5-11 age group, while their rates were higher or similar to White children’s rates among those ages 12 and older or children overall (in states that do not include separate age breaks among children). Overall, it remains challenging to draw strong conclusions about racial equity in COVID-19 vaccinations among children due to the dearth of comprehensive data, inconsistency in reporting, and the lack of disaggregated data for smaller racial/ethnic groups, particularly NHOPI children.

Growing data point to significantly increased risks of COVID-19 illness and death for people who remain unvaccinated. White people account for the largest share of people who remain unvaccinated. Black and Hispanic people have been less likely than their White counterparts to have received a vaccine over the course of the vaccination rollout, but these disparities have narrowed over time and largely closed for Hispanic people.

The increasing equity in vaccination rates likely reflects a combination of efforts focused on increasing vaccination rates among people of color through outreach and education and reducing access and logistical barriers to vaccination, increased interest in getting the vaccine due to the spread of the Delta variant, the emergence of the Omicron variant, and increases in vaccinations among younger adults and adolescents who include higher shares of people of color compared to other adults. Despite this progress, the ongoing disparities in rates highlight the importance of continued efforts to increase vaccination rates and to address gaps in vaccination both geographically and across racial/ethnic groups. Moreover, it will be important to prevent disparities in uptake of booster shots and among children between ages 5 to 11, the latest group to become eligible for the vaccine.

While the data provide useful insights, they also remain subject to gaps, limitations, and inconsistencies that limit the ability to get a complete picture of who is and who is not getting vaccinated. The completeness of race/ethnicity data has improved in most states over time as the shares of vaccinations with unknown or missing race have declined. However, some states still have relatively high shares of vaccinations among people classified with “unknown” race/ethnicity and three states still are not reporting vaccination data by race/ethnicity. Inconsistences in racial/ethnic classifications across states as well as separate reporting of data for federally administered vaccinations, including those provided through the Indian Health Service and federal long-term care partnership program, also limit the ability to interpret the data.

In addition, ongoing changes and updates to the data may make it challenging to interpret the data and trend it over time. For example, some states have reported declines in cumulative vaccinations for some racial/ethnic groups over time. These declines reflect a variety of factors, including changes in state reporting methods and recoding of individuals’ racial/ethnic classifications over time. For example, several states have indicated that an individual’s self-reported race/ethnicity may change if he or she records a different classification when receiving a subsequent COVID-19 vaccine dose or another vaccination, such as the flu shot.

Complete data on the distribution of vaccinations by race/ethnicity as well as the percent of the total population that has received at least one COVID-19 vaccine dose are available and downloadable through our State Health Facts Online tables. KFF will continue to update these data on a regular basis going forward as vaccination distribution continues.