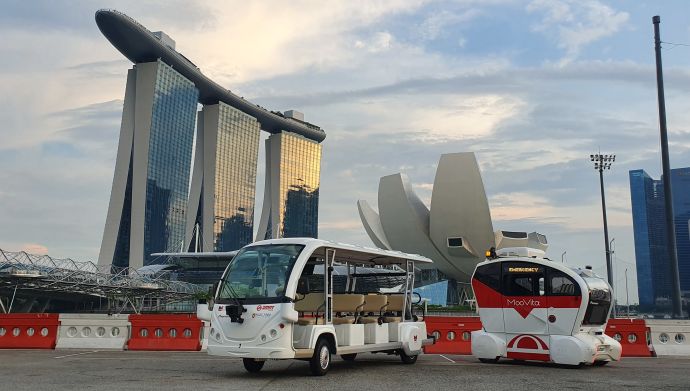 An image of a MooVita car

MooVita, an autonomous vehicle (AV) tech startups based in Singapore, has raised multi-million dollar amount in a Series A round of investment, led by Yinson Green Technologies Division, a subsidiary of Malaysian energy infrastructure company Yinson Holdings.

SMRT Ventures, the corporate venture arm of SMRT Corporation, also participated in the round.

This investment marks Yinson’s first foray into the mobility space.

As per a press note, these plans are aligned with Singapore’s “Sustainable Singapore Blueprint”, which sets out to achieve a cleaner and greener transport system by 2030.

“With this injection of capital, we will focus on advancing our driverless technologies, building a fleet of driverless shuttle buses and safe on-road operations, expediting the deployment of the MooVita’s driverless public transport solutions across Asian urbanscapes, starting from Singapore and Malaysia,” said co-founder Dilip Limbu.

Established in 2016, MooVita is specialised in designing and deploying roadworthy autonomous vehicles in urban cities worldwide. It is currently developing a component-based driverless software solution, which transforms various vehicle types into versatile autonomous vehicles for multitudinous driving conditions and applications, such as first/last-mile transportation, logistic transportation, agriculture, and utility solutions.

Headquartered in Singapore, Moovita also has offices in Malaysia and India.

According to Digital News Asia, the company was also the first to receive approval to test its autonomous vehicle in Cyberjaya, Malaysia.

“Our plan is to replace existing infrastructure and develop innovative business solutions in order to make transportation sustainable through the adoption of clean and environmentally sound technologies. The co-investment into MooVita presents a wonderful opportunity to contribute back to the sustainable transportation infrastructure in Singapore,” commented Yinson Group Vice President Eirik Barclay.

“We are adopting a targeted strategy where we tap into our existing strengths in logistics solutions, energy infrastructure, and renewables; and focus on the geo-markets where we’re currently active. We believe that this approach will help us to build profitable, disruptive businesses, that meet the needs created by the global climate action agenda,” added Yinson Group Chief Strategy Officer, Daniel Bong.

According to KPMG’s latest Autonomous Vehicles Readiness Index, Singapore holds first place for autonomous vehicle (AV) policy and regulation and second for infrastructure — surpassed only by the Netherlands — and is widely recognised as a global leader in AV development.

Some of the other AV companies currently active in the region include nuTonomy, Red Dot Robotics, and OpenSourceSDC.

According to data compiled by Tracxn, there are 10 smart car startups in Singapore as of 2020.