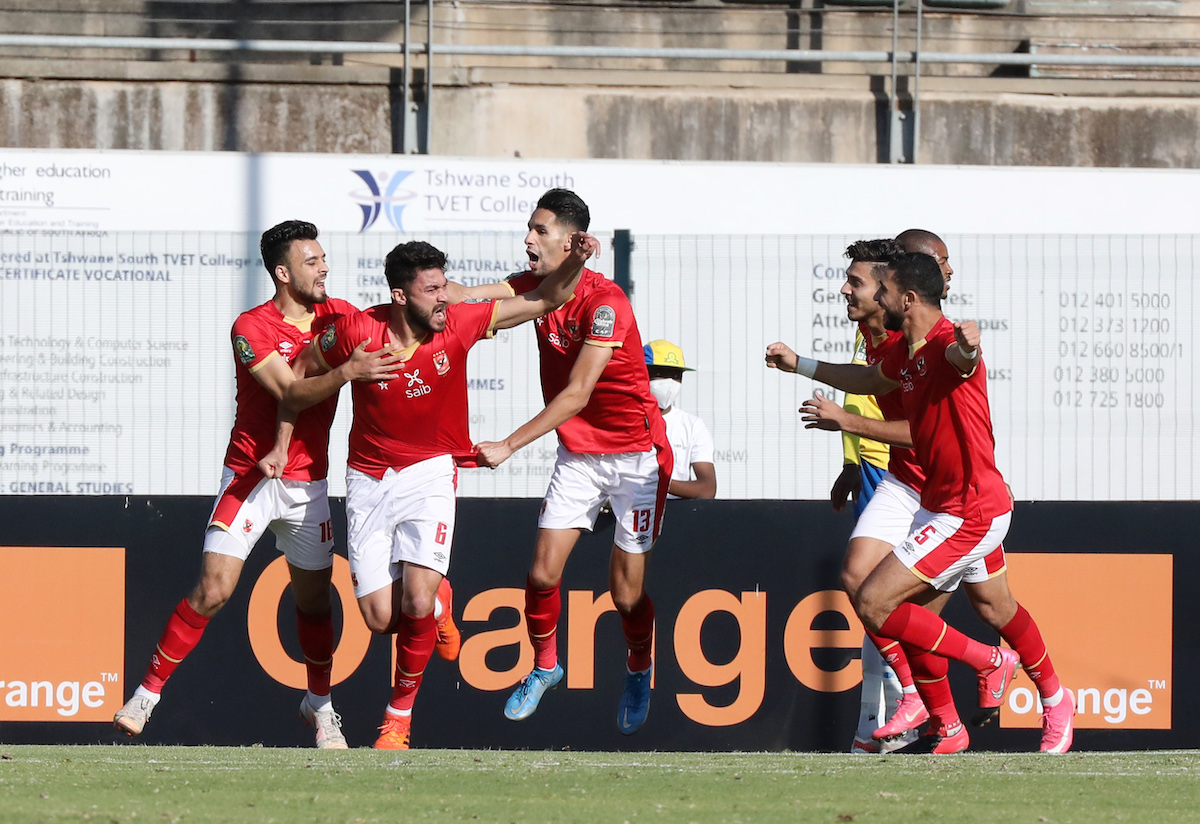 An early Yasser Ibrahim goal leaves Sundowns needing four goals, and they can only manage one.

Al Ahly put in a controlled performance in Tshwane yesterday, an early away goal and a strong defensive display seeing them make smooth progress into the Caf Champions League semifinals at the expense of Mamelodi Sundowns.

Pitso Mosimane looked stern-faced on the touchline throughout this 1-1 draw at the Lucas Moripe Stadium, but must have enjoyed this triumph over his former team, especially as the tie was basically sealed with Yasser Ibrahim’s goal inside the first 11 minutes.

Sundowns paid for some poor marking from a set piece, but can mainly look back on the first leg in Cairo with dismay, as their failure to take their chances left them with a 2-0 deficit and a mountain to climb against any side, let alone a side of Ahly’s continental prowess.

Mosa Lebusa did grab a first half equaliser for Masandawana, but they never really looked like getting the four goals required once Ibrahim had hit the back of the net.

As might be expected for a tie sitting as this one did after the first leg, Sundowns began this game probing away at Ahly’s organised defence, with Mosimane’s side content to sit in and allow Masadawana most of the possession.

The first ten minutes, however, yielded little joy for Masandawana’s attackers, and they were soon hit by a classic sucker punch. Ahly won a first corner of the match, and after a fine in-swinger was flicked on, Ibrahim arrived unmarked at the back post to nod in.

The Ahly celebration, led by a grinning Ibrahim said it all –  the game was as good as up.

To their credit, Masandawana were not about to throw in the towel, and continued to put pressure on the Red Devils defence, a shot from Sphelele Mkhulise flying just wide of the post.

Ahly were dangerous on the break, and Sundowns ‘keeper Denis Onyango had to be alert to tip an attempted cross from Ibrahim over his own crossbar.

In the 30th minute, the Brazilians did draw level, a cross from the left powerfully headed by Lebusa past Mohamed El-Shenawy.

Themba Zwane, making his return to the Sundowns starting line-up, then played a delightful one-two, but hit his shot wide, as the sides went into the break all square.

Sundowns had a great chance just five minutes into the second half, as they were awarded a free kick right on the edge of the area, but Aubrey Modiba curled the set piece over the bar.

Masandawana threw on tall striker Mauricio Affonso and he almost made an immediate impact, the Uruguayan’s header palmed away by El-Shenawy.

With 20 minutes left, Peter Shalulile did put the ball in the net, volleying home, but the goal was ruled out after the match officials adjudged he had controlled the ball with his arm.

Kermit Erasmus had come on by then as another substitute, and his strike was well -saved by El-Shenawy, but that was the last chance Sundowns were to have.