Pitso Mosimane’s Al-Ahly get the better of Sundowns 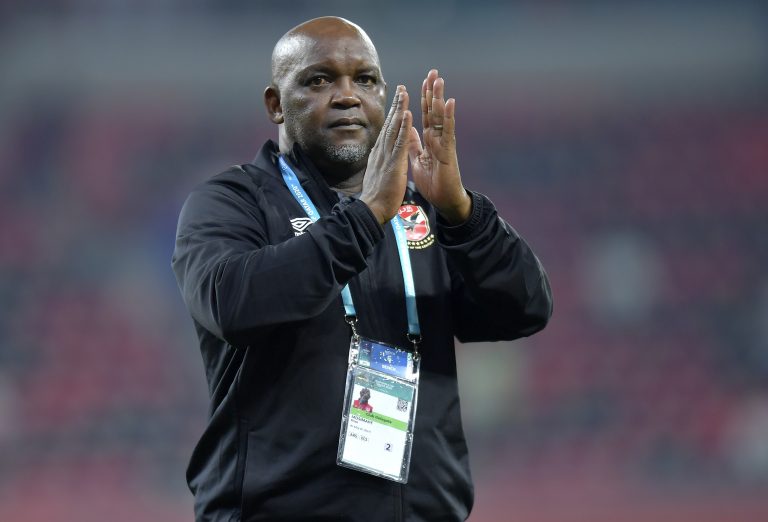 He who laughs last has the most joy and right now, we don’t know who will have the last laugh but the first laugh belongs to Pitso Mosimane after he guided his side to a 2-0 win over his former Mamelodi Sundowns side in the first-leg of the Caf Champions League between Al-Ahly and Downs.

Mosimane’s Red Devils have the upper-hand, only just, as they avoided conceding at home on Saturday night in Cairo, setting just a toe into the semifinals ahead of the second-leg set to be staged in Pretoria next weekend.

To beat a quality goalkeeper like Denis Onyango needs some effort and Taher Mohamed put in a lot of it in the 27th minute to fire a curler past the Downs shot-stopper and give his side the lead. He was found by an Aliou Dieng cross wide on the left flank and he cut in with so much pace that even Thapelo Morena, with his bolting speed, could not track him fast enough to prevent the shot that left Onyango for dead.

Salah Mohsen made it 2-0 in the dying moments of the match when Onyango miscalculated his move from the box as he attempted to clear a tricky cross but could not get there on time, leaving it to Mohen to slot into an empty net.

Sundowns could have been the ones who opened the scoring in the 21st minute when Gift Moutpa did well to beat goalkeeper Mohamed El Shenawy with a header, but his effort was not good enough to kiss the back of the net as it shaved the upright, much to the relief of the Ahly skipper, who didn’t really see it coming.

Sundowns were without talisman, Themba Zwane, who seemingly did not win the race against time to be fit for the tie after he limped out of a DStv Premiership tie against Maritzburg United over a week ago. However, they started the game with arguably their most potent attackers in Peter Shalulile, Motupa and Gaston Sirino, but the trio’s creativity was limited and couldn’t do much to tilt the result in Masandawana’s favour.

Sirino was withdrawn in the 68th minute and Kermit Erasmus made his way on, making his fifth Champions League appearance. He made a decent impression after he came on, creating some combination play with Motupa and Shalulile and in the 70th minute he beautifully laid the ball on the alley of Motupa, who then had a clear view at goal but ballooned his shot way off the mark.

Moutpa and Aubrey Modiba were replaced in the last 10 minutes of the game as Masandawana coaches threw the dice with Promise Mkhuma and Lyle Lakay, but the night belonged to the hosts who remained resolute until the fat lady sang.