Guptas had their own ATM at home, advocate reveals 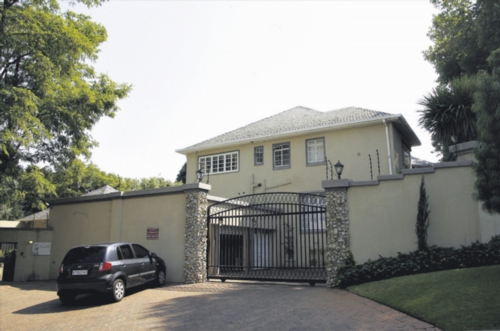 “Evidence is going to be led at this commission, shortly, that at the Guptas they had a cash-dispensing machine … an ATM machine.”

This revelation emerged surprisingly on Monday afternoon at the Commission of Inquiry into Allegations of State Capture during the testimony of former Transnet group CEO Siyabonga Gama.

Evidence leader Anton Myburgh SC was responding to Gama’s attempts to mock numerous allegations that he had been given large amounts of cash on an ongoing basis by the Guptas and/or their associates.

Myburgh responded, however, that there was apparently no shortage of cash in Gupta circles, as numerous witnesses had made it clear that the family and their associates had access to several large safe-deposit boxes and that evidence would shortly be heard that the Guptas even had a personal cash-dispensing ATM, which he implied was at their residence, without explicitly saying so.

“This commission has heard a raft of evidence about there being lots and lots of cash used by many, many senior executives. So what it perhaps turns on is how many occasions you in fact went to the Guptas. You say you only went there once,” Myburgh told Gama. Earlier, Gama had denied almost all the testimony against him from one of his former close-protection officers at the state-owned entity, contending that almost all of it “is a fiction”.

Gama told evidence leader Anton Myburgh SC that the level of detail in the evidence file of “Witness 2” could only be as a result of him having taken his time to fabricate it and conspired with other people. He also alleged the witness must have been “coached” by Gama’s enemies.

“There’s a motive. There’s intent. And the person has got time.” Gama likened it to “people who write movies like Steven Spielberg … they sit and they conceive these things. It doesn’t mean that everything we see in the movies ever happened or is the truth.”

Gama speculated that the witness must have been “aggrieved” against him because Gama allegedly drove him to resign from Transnet. Gama alleged the witness had, however, “run away” from a disciplinary hearing in November 2017, and had not been honest about that in his testimony.

He on Monday repeatedly attempted to poke holes in Witness 2’s testimony. At one point, he even alleged that the reason his driver may have taken his vehicle to the home of one of Gama’s friends in Bryanston at nearly 11pm one evening – without him – was because the driver was trying to trespass at this property, though he did not offer a reason for why the protection officer may have been trying to do this.

In another instance, Gama pointed out that the witness’ testimony placed him in “two places at once”, which could not have been possible, he said. The witness claimed Gama was at the African Pride Melrose Hotel, while his diary had shown that he was ostensibly at a meeting with the chairperson of the Transnet board at the Carlton.

Gama insisted that if the diary showed he was scheduled to be in that meeting, then he must have been at it and not at Melrose Arch venue, which he had no recollection of visiting.

He further speculated that some of the places showing up on the geolocation map, historically, may have been his driver “going to a number of places on his off days”, but without Gama. He could not think of any reason why his driver would have gone to a residence in Elgin Road for five minutes on the evening of 22 July 2017 if he had not been dropping Gama off.

The evidence leader says they will lead evidence that the Guptas had an ATM in their house.
Inside the house? pic.twitter.com/UBPpXhf0c6

The witness further alleged that, on several occasions, Gupta business associate Salim Essa had handed him cash in plastic bags at the African Pride Hotel.

Witness 2 further said that on June 13 2017 they had collected a bag from Essa at Melrose Arch. The driver estimated that there had been as much as R1 million in the bag. Gama allegedly shared a small portion of the total, R50,000, with him, which Witness 2 said he then used in a personal home-building project.

ALSO READ: Siyabonga Gama: I stayed over in Dubai to buy a dress

He also claimed that in 2015 he discovered R200 notes amounting to about R100,000 in the boot of one of Gama’s cars, a Mercedes SL63 – allegedly concealed in the spare wheel compartment.

He did, however, confirm that he owned such a vehicle. He further agreed that he owned many cars but denied it was “an impressive array of cars”. He said most of his cars were actually a decade or more old and he simply never sold any cars once they were paid off.

Gama said it was unlikely the driver would have checked on any of his cars, in any event, while Gama had been overseas. Instead, he would normally have been given time off or been assigned to protect someone else for that period.

On another occasion the driver allegedly found a red medical-aid kit in the back of Gama’s Range Rover with about R100,000 in it, also allegedly in R200 notes.

At the time, he said he had transported Gama to Denel’s offices for a meeting. Gama attempted to poke a hole in this by saying that the described presence of Jiyane at the meeting cast doubt on the witness’ testimony, as Jiyane should not have been present at a meeting of various SOE CEOs.

The witness must have been “induced and coached” to “come up with stories” and had woven these in with some facts, such as that there had been a Denel meeting.

When asked who may have coached this witness, Gama said that a City Press report had alleged Witness 2 had met with Transnet’s chairperson.

“Why is a close-protection officer meeting with the non-executive chair of Transnet?” asked Gama.

According to the report Gama had read, the chairperson referred Witness 2 to Mohammed Mahomedy (then Transnet acting CEO) to be reinstated to work for Transnet. Gama speculated that the witness may have been told to “give us a believable story around Mr Gama, and maybe we can hire you … and then he proceeds to write a lot of this fiction we are seeing here today”.

Gama said he was positing this merely as a possible scenario based on the Sunday newspaper report.

“Some of the things that were said there … were predicted in that article, and then they happened.”