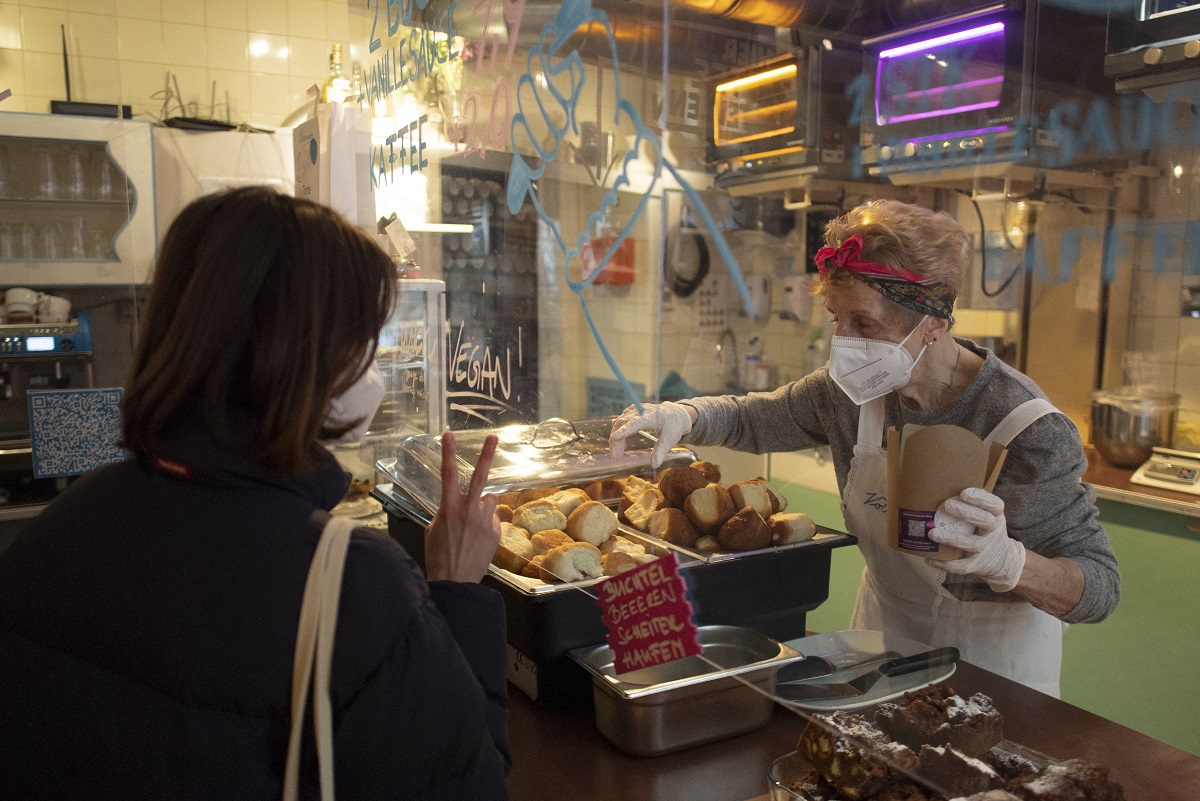 Framed by wooden cabinets, Karin Hofbauer holds a stick of butter to her laptop camera and imparts to the novice bakers gathered virtually in her kitchen the secrets of kneading short crust dough.

“It’s a simple recipe, I’ve made it so many times for friends and family, and it’s always a success,” the 62-year-old Austrian says before filling the baked apple tart with nuts and vanilla custard. The five Germans and Austrians taking notes have come to the online class because the recipes are simple and straightforward — and because they’re taught by real-life grandmothers like Hofbauer, who will soon be joined by fellow grannies and grandpas from across the world in a scheme run by a Vienna cafe.

Two years ago, Hofbauer retired from an administrative position at a hospital. Healthy, active and eager to “do something meaningful”, she joined about 50 other “grannies” at Vienna’s Vollpension cafe, a social enterprise where retirees bolster their often meagre state pensions and bake away the loneliness many senior citizens can feel.

The idea was born almost 10 years ago, over a too-dry slice of cake at a Vienna cafe.”Nobody makes better cakes than grandma,” Vollpension’s co-founder Moriz Piffl-Percevic tells AFP, recalling how wistful the dry sponge made him for the comforting indulgence of his grandma’s cakes.

Following a “Granny Wanted” classified in a local paper and some trials as pop-up cafes at festivals, the intergenerational team opened the first “Vollpension” — a German term referring to both full retirement and accommodation with full board. At the social enterprise’s two cafes, coffee is served in old mugs with flower prints and cross-stitches of border collies grace the walls.

ALSO READ: Baking has never been so stress-free

The clientele, many of them hipsters, are often joined by the elderly part-time hosts — unless, of course, a pandemic forces them to shut.- ‘Keep our grannies going’ –

When Austria’s first virus lockdown hit, patrons donated 140,000 euros ($170,000) to maintain the extra income that many of the staff depend on — especially single women who, after years as homemakers, receive relatively small state pensions. That, however, is just one benefit of the social enterprise.

“Older people want to feel needed, that is something incredibly essential to ageing, and that’s something that Vollpension provides,” says Franz Kolland, a professor at the University of Vienna who focuses on social aspects of old age. As people grow older, “they face two decades of retirement during which they are mobile. They want to do something — they just have to be approached,” Kolland says, lauding Vollpension as a “role model”.

Piffl-Percevic says he is touched when friends and family report how much their grandma’s wellbeing improved after joining Vollpension. “Suddenly they don’t feel their hip aching anymore, or they’ve stopped drinking a little too much,” he says. To “keep our grannies going” during the pandemic, Piffl-Percevic and his colleagues began looking for alternatives beyond takeaway cake. Taking the grandmas’ and grandpas’ baking skills online was the next logical step.

An army of volunteers helped create a baking studio similar to those of TV chefs, and filmed on-demand baking classes ranging from Christmas cookies to vegan cakes, while Hofbauer and others are hosting live baking classes in their own kitchens.After overcoming the familiar pitfalls of Zoom meetings, Hofbauer is passing on her knowledge from decades of baking — including on the best apple peeler: “It doesn’t have to be something expensive — I think mine cost three euros,” she says, laughing.

When the most recent Vollpension cafe opened — just before the pandemic — more than 300 eager seniors applied within 24 hours.

The baking courses’ success with hundreds of participants is now prompting Vollpension to go global. In several languages, Vollpension is this week calling on grandmas and grandpas from all over the world to join them.

“Vollpension was founded to give people like us a place where they find meaning, and can lead a life worth living even in old age,” one granny says in Italian in a video promoting the call for applications. People from all over the world can learn to bake with “original family recipes from the region, and straight from grandma’s kitchen,” another one says in Spanish.

“It’s about local and national recipes — mango with sticky rice being taught by a Thai grandma, and panna cotta by a Sicilian,” Piffl-Percevic says.Hofbauer, who says she has had participants tune in from Boston and Crete, is already looking forward to see the baking classes go global. “I found new friends, new acquaintances, and if we’re going international, it’s going to be even more fun,” she says, the scent of warm apple tart now filling her 80s-style kitchen. “The more the merrier.”