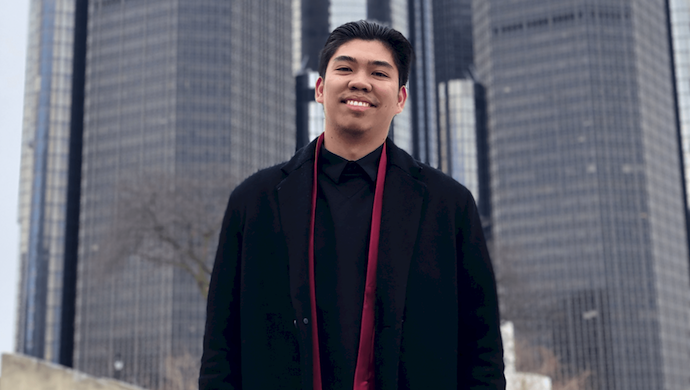 I came to the US in 2018 to pursue my undergraduate studies in Computer Science and everything was going great –until the COVID-19 pandemic came into play.

All of sudden, things started to tone down. Life just felt weirdly different and I felt like losing direction in life. Late 2020, I was interning as a Creative Director for social media influencer Alexis Ren’s Los Angeles-based startup, when I realised that I had to do something different to find myself again and my purpose.

The pandemic and lockdown led more Filipinos to access information online. According to the global broadband speed monitoring system Ookla, the Philippines is at 83rd place in terms of mobile speed as of February 2021, thus providing ways for more Filipinos to gain access to the internet.

The AppStore economy is US$1.3 trillion and Apple created more than 1.5 million jobs in iOS alone and iOS developers are paid more by an average of US$85,000.

Apple CEO Tim Cook has the right stance regarding people’s privacy and security and because of this, the Apple ecosystem is attracting more users and developers. More people buy iPhones nowadays, and thus more demand for iOS development and engineering jobs.

The need to help Filipinos find opportunities in mobile software and product development led to my idea of bringing a piece of the Silicon Valley to the Philippines.

Also Read: How my entrepreneurial failures led me to rethink learning and upskilling

The future is mobile and we’ll see more people creating the Clubhouses or Snapchats of tomorrow.

By establishing an online coding school, more Filipinos would have access to learn more about iOS application development using cutting-edge learning methodologies built by Apple to prepare them for solving real-world problems through coding.

This led me to build Hikre School, along with my two US-based co-founders.

Hikre School offers a 16-week course of iOS software development, product design stack, and soft skills required by most tech companies locally and globally. We also provide one-on-one mentorship and career placement, so that students can get high-quality jobs here and abroad after they graduate.

Most students don’t want to pay hundreds of thousands of tuition just to end up being unemployed after graduation. So we give students an option to pay tuition fees until they are hired.

How it all began

I am the first Filipino alumni of Apple’s exclusive school, the Apple Developer Academy in Italy, where I’ve worked on more than five software projects with different groups of people for a year.

I learned iOS Development, human interface design, business marketing, and storytelling and I even had the chance to speak in front of Apple execs to present our project.

Then when I came to the US, I got the opportunity of working for a startup based out of Stanford University, which eventually gave me the push to visualise the idea of creating an American dream-as-a-service by packaging my skills and experiences and making them accessible to my fellow Filipinos.

We envision our future students having access to amazing opportunities not only in Asia but in Europe and in the US. I want the Philippines to be the next Silicon Valley in terms of talent and mindset.

It is a community, culture, calling of people who want to change the world. We’re not calling themselves an e-learning company, but an education infrastructure company.

iOS development has barely scratched the surface in the Philippines, while top-tier universities such as Stanford University, the University of Toronto, and Harvard University already offer it as a course due of the rise in demand.

The Philippines is a country full of humble and hard-working people with limitless potential, and they can go far as much as they want, but they lack the necessary skills, resources, and mindset to make that happen. Skills such as software development, app design, storytelling, and copywriting are crucial to an ever-changing world. Hikre School is here to do that.

The post Why I left a budding career in the US to help aspiring developers in the Philippines appeared first on e27.