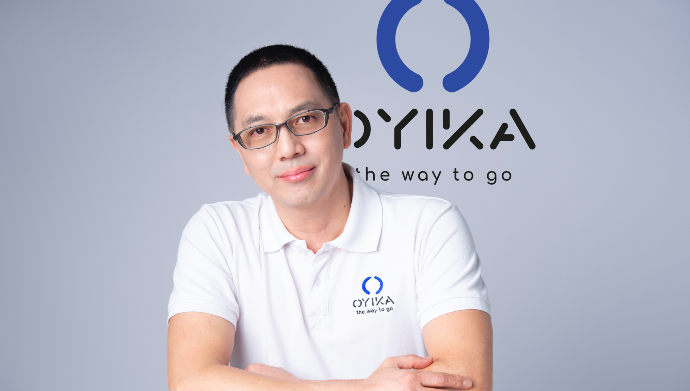 With 250 million motorbikes, Southeast Asia has the highest density of motorbikes globally. Of these, half are in Indonesia and a quarter in Vietnam, the third and forth largest markets in the world.

Motorcycles also constitute 85 per cent of vehicle population in the region and a significant contributor to pollution.

The advent of electric motorbikes has started changing things for the better. However, they account for just 0.1 per cent of the total two-wheeler population in the region.

Mass production/usage of e-motorbikes is still years away, thanks to their higher costs than internal combustion engine (ICE) bikes. Plus, the region lacks the infrastructure such as charging stations to support e-vehicles.

Three years ago, Jinsi Lee and his team sniffed an opportunity here and came up with a unique idea. In May 2018, they launched a startup, called Oyika, out of Singapore to provide a power subscription plan bundled with e-motorbike.

“Our mission is to lower the barriers to e-vehicle adoption in developing countries,” Lee said in an interview with e27.

Also Read: ‘Singapore isn’t ready for mass adoption of EVs yet; hybrid may be better for the present’

As for its power subscription plan, Oyika works with existing e-motorbike/scooter manufacturers and transforms their ICE models into smart bikes by bundling them with its portable swap batteries, network of swap stations and mobile app.

As per this, a rider with a pay-per-use,  prepaid weekly, or postpaid monthly plan can swap his/her depleted battery for a fully-charged one at an Oyika swap station within a minute.

“The process is faster than the conventional charging of an e-motorbike via a home power outlet, which could take up to eight hours to fully charge,” claims Lee.

The battery is brand-agnostic and works with most e-motorbike brands and models in Southeast Asia. The battery is Internet of Things-enabled, so it can be monitored remotely for optimal performance and safety. A stolen e-motorbike can be tracked and remotely switched off, effectively making it theft proof.

The system is entirely operated through Oyika’s mobile app that enables riders to locate a nearby swap station to exchange their depleted battery for a fully charged one.

Lee said that the company is in talks with seven major motorcycle brands in Indonesia to launch its subscription service. However, he didn’t share the names.

Oyika has successfully trialled its battery-swap service in Cambodia and Indonesia via flexible power subscription plans bundled with an e-motorbike.

“In Indonesia, we work with the likes of Grab riders and gojek riders. In this market, most riders own their own bikes and they are contracted on a part time basis to run for these delivery companies. It is a massive opportunity,” he noted.

The startup also has plans to broaden its customer base to include students, office workers and corporate customers, he shared. “In the meanwhile, we need to fulfil our order book of 30,000 power subscription plans, including for union members from the Indonesian cooperative, Friends of the Indonesian Police.”

The subscription plans start at US$72 per month, which Lee says is a cheaper alternative to the traditional bank instalment plans. “Oyika’s innovative business model and power subscription plans allow it to be price- competitive even in Indonesia where petrol prices are subsidised.

Plus, each ICE motorbike on the road replaced by an e-motorbike saves about one tonne of CO2e a year, equivalent to planting 16.5 trees over 10 years, according to the US Environmental Protection Agency,” he said.

In Indonesia, the company is also innovating another energy-share service in rural communities. This is aimed at bringing electricity to households that do not have access to the national grid. These households lack the very basics — such as lights, fans, fridges, or the ability to charge a mobile phone.

The startup is conducting trials in remote Indonesia where the same portable batteries provide electricity to off-grid households. Under this plan, getting electricity at home will simply involve placing the battery into an Oyika home docking system and connecting electrical appliances to it.

There are 30 million people with no access to electricity in Southeast Asia, according to the World Bank.

“It’s an exciting proposition to have the same battery lighting up homes as well as powering transportation. It has taken many years for battery prices to fall to a point where they can electrify rural communities and improve millions of people’s lives. And this is just the beginning,” Lee pointed out.

Oyika’s other plans include expanding in Vietnam later this year. It also plans to bid for a contract to build and install charging stations for e-vehicles in Singapore, which plans to phase out cars that run on petrol by 2040.

The cleantech company is backed by Sunseap co- founders — CEO Frank Phuan, and President Lawrence Wu. The duo invested through TRIREC, an investment firm with a focus on renewable energy and clean technology projects.

Oyika is currently in talks to raise US$100 million, which will be used to roll out the battery-swap service in Indonesia.

“It is very difficult for a rider to secure bank loans for e-motorbikes. So the money we raise will be used to provide financing services to riders. We are talking to several VCs and corporate investors, some of whom are in the oil & gas sector, who desperately want to do something in the clean space or offset the carbon,” he concluded.

The post How Oyika helps tackle global warming through its power subscription plan bundled with e-motorbike appeared first on e27.