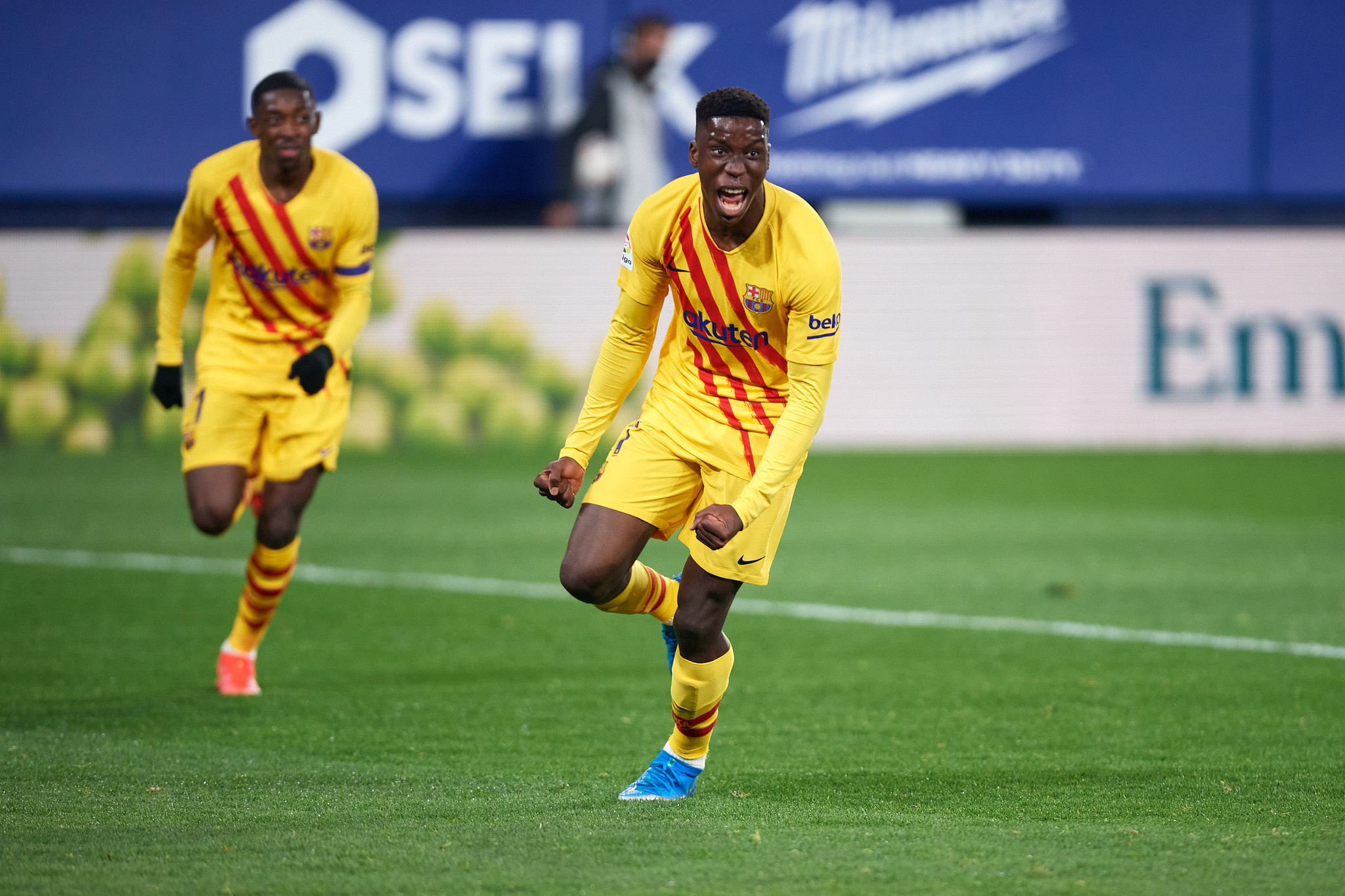 
On March 6th at the Camp Nou, Barcelona captain Lionel Messi laid the ball back to Ilaix Moriba, who dummied an Osasuna defender with his right foot then smacked an unstoppable left footed shot to the top corner from 20 yards out.

Amid the joyous celebrations, LaLiga’s latest rising star opened his arms to embrace Messi. At just 18 years and 46 days old, Ilaix had become the fifth youngest scorer in Barcelona’s history.

Born in Conakry, capital of Guinea on 19 January 2003, to a Guinean father and Liberian mother, Ilaix arrived in the Catalan capital as a small boy and lived with his family in the city’s Santa Coloma de Gramenet suburb.

The first LaLiga club to spot his potential was Espanyol, but he soon joined Barcelona’s La Masia academy, when he was still just seven years old. Quickly recognised as a potential future star, he made his way quickly through the ranks, often playing above his actual age-group, along with close friend and fellow nationalised Spaniard Ansu Fati, who was born in neighboring Guinea-Bissau.

Such clear potential brought interest from top clubs around Europe, especially after some standout displays with Barça’s U-19 team in the 2018-19 UEFA youth League. But Ilaix and his family were sure that Barça was where he wanted to develop his career, and a new contract signed in April 2019 paved the way towards the senior team.

His rise has been rapid. 2019-20 saw Ilaix become a regular in the Barça B team, playing in the third tier of Spanish football. In autumn 2019, he played for Spain at the U-17 World Cup, scoring in the group stages against Cameroon, with the goal assisted by then Las Palmas midfielder and now teammate Pedri. Ilaix’s first league strike was a vital one, volleying in a late winner to complete a 3-2 comeback victory over Llagostera, making him the second youngest Barça B scorer in history.

The current campaign began with Ilaix again playing for Barça B, while being regularly called to train with the first team by coach Ronald Koeman. After featuring against Cornella and Rayo Vallecano in the Copa del Rey in January 2020, Ilaix was given his LaLiga debut on February 13 against D. Alaves, just days after his 18th birthday. He marked the occasion by setting up teammate Trincao for the opener in a 5-1 victory. Just a few days later he provided a backheel assist as Messi scored in the 2-0 win at Sevilla, before scoring against Osasuna on just his third LaLiga appearance.

Two assists and a fine goal within his first 100 minutes of LaLiga action was quite an arrival at the top level, especially considering that Ilaix has scored just twice in 18 games for Barça B. While many have spoken of his similarity in style and stature to Manchester United’s Paul Pogba, he himself says his idol has been Barca’s long-serving ‘holding midfielder’ Sergio Busquets, now of course a teammate, as well as former blaugrana captain Andres Iniesta.

Koeman’s faith in youth has really paid off during this difficult transitional season at the Camp Nou. Pedri (18), Ansu Fati (18), Ronald Araujo (22), Oscar Mingueza (21), Riqui Puig (21), plus US internationals Sergiño Dest (20), and Konrad de la Fuente (19) have all made valuable contributions as Barça reached the Copa del Rey final and surged back into the LaLiga Santander title race.

The youngest of them all is Ilaix Moriba, the Guinea-born Spain international who has begun his LaLiga career with a bang. But he’s only just getting started.