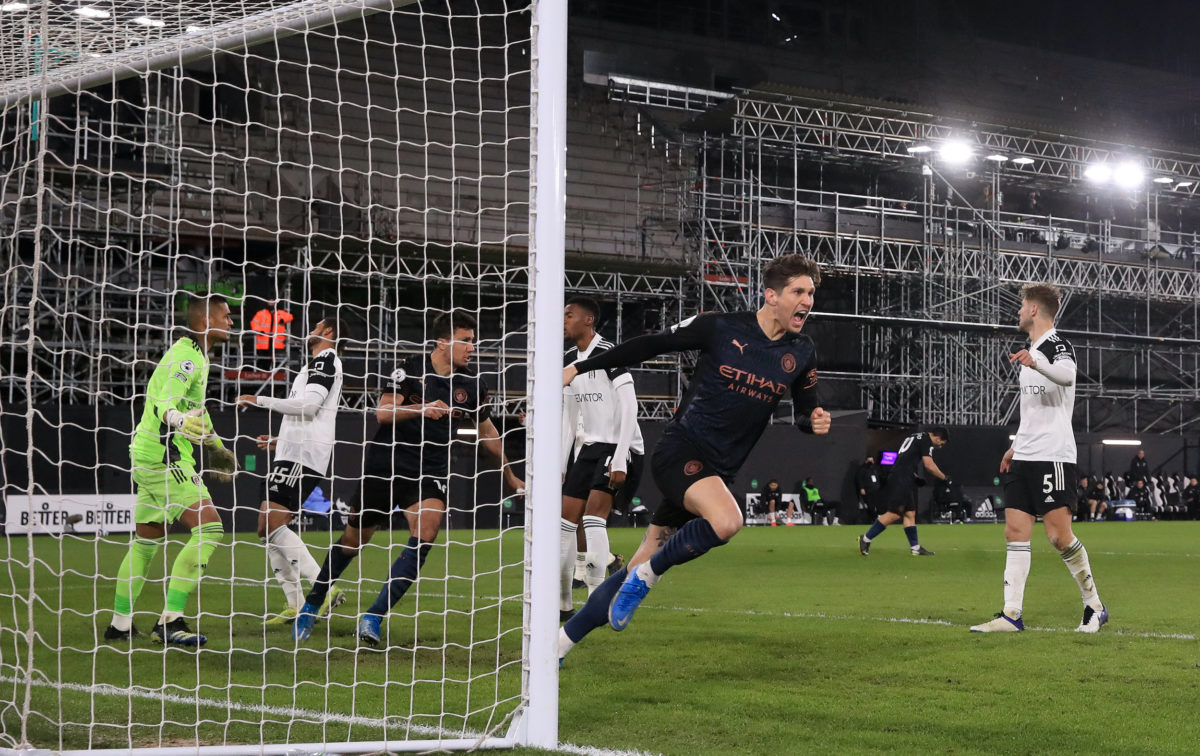 
Manchester City showed their strength in depth as a much-changed side by Pep Guardiola won 3-0 at Fulham on Saturday to stretch their lead at the top of the Premier League to 17 points.

All three goals came in the first 15 minutes of the second-half as John Stones, Gabriel Jesus and Sergio Aguero struck to take City ever closer to a third league title in four years.

Manchester United have two games in hand on the runaway leaders, but City need a maximum of just 14 points from their final eight games to claim the title.

“The dynamic of the season is good,” said Guardiola. “The second-half was so important. It is an important victory for us and we are closer.”

Guardiola’s men are still on course for a historic quadruple of trophies this season.

Ahead of their return to Champions League action against Borussia Monchengladbach in Budapest on Tuesday, the Catalan coach made seven changes with Kevin De Bruyne, Ilkay Gundogan and Riyad Mahrez among those left on the bench for the full 90 minutes.

“I will arrive well in Budapest through rotating,” added Guardiola, who has made a Premier League high 94 changes to his line-ups this season.

“Sometimes the players don’t believe me, I want everyone involved. Sometimes it is difficult but everyone has to make a contribution to win games and we will arrive at the end of the season fighting as best as possible.”

Despite still sitting in the bottom three, Fulham had been on an impressive run to haul themselves back into contention for survival, including a stunning 1-0 win away to Liverpool last weekend.

Scott Parker’s men proved stubborn opponents again for the first 45 minutes, but were architects of their own downfall in the second period.

“We conceded silly goals in the second half,” said Parker. “The first one from a set-piece is too easy and then the other two are mistakes.”

All Fulham’s good work was blown away inside the first two minutes of the second-half as Stones opened the floodgates by latching onto Joao Cancelo’s free-kick for a simple finish.

Fulham opened themselves up for the second as Joachim Andersen’s clearance ricocheted off teammate Ivan Cavaleiro into the path of Jesus, who coolly rounded Alphonse Areola before blasting into an empty net.

Aguero’s appearances have been restricted this season by injuries and testing positive for coronavirus.

City’s all-time top scorer had not netted in the Premier League since January 2020, but when Ferran Torres was felled inside the box by Tosin Adarabioyo, the Argentine quickly grabbed the ball.

Failure to score from the spot has been one of City’s few weaknesses this season, but restored to penalty duty, Aguero made no mistake.

“For him score a goal is everything,” said Guardiola.

A three-goal lead allowed Guardiola to withdraw Bernardo Silva and Ruben Dias early ahead of the trip to Budapest.

Already holding a 2-0 first leg lead, a fourth consecutive quarter-final should be a formality, but claiming the club’s first ever European crown is the one piece of unfinished business for Guardiola since arriving in Manchester five years ago.

There is little doubt, though, that the City boss will soon be able to add a third Premier League title to his hat-trick of La Liga and Bundesliga wins with Barcelona and Bayern Munich.