Pirates get crucial away point against Setif – The Citizen 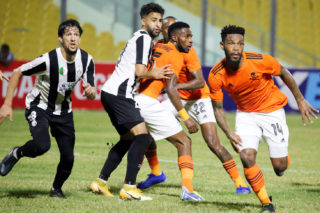 
It might have been difficult, but Orlando Pirates managed to walk away with a crucial point in their opening game of the Caf Confederation Cup group stages game against Algerian outfit ES Setif at the Accra Sports Stadium in Ghana on Wednesday night.

Pirates have probably done themselves a huge favour by getting a point away from home, with the teams playing from a neutral venue due to traveling restrictions in Algeria because of the coronavirus.

Bucs, however, didn’t start the game well, with an injury to goalkeeper Richard Ofori. The match also seemed to be one sided in the first half, but things changed for the better for Bucs in second half as the Soweto based outfit managed to create some goal scoring chances.

There was a lot of action from the start of the game from the North African country side, with the host pilling the pressure on the Buccaneers.

Pirates midfielder Siphesihle Ndlovu had to make an important goal line clearance as early as the sixth minute into the game.

Five minutes later, Pirates were forced to make an early substitution after Ofori pulled his muscle while taking a free-kick.

The Ghanaian shot-stopper was immediately replaced by Siyabonga Mpontshane.

Bucs weren’t really making any threats in the Setif box with many of their attacks stopped.

The Buccaneers first real chance of the game came when skipper Happy Jele connected well with a free-kick from Linda Mntambo, but the defender’s header went over the bar in the 32nd minute.

With Setif having had the upper hand in the game, the Algerian’s couldn’t make it count as the sides went into the break tied on 0-0.

Pirates seemed to be a bit rejuvenated in the early moments of the second half. Fortune Makaringe got an opportunity to test Setif keeper Khairi Barki, but his shot just went off target in the 47th minute.

The Buccaneers went on another attack, this time around with Vincent Pule’s long range shot, but the ball once again went over the bar in the 52nd minute.

In the 73rd, a dangerous shot by Setif’s Mohammed Amoure was blocked by Makaringe, with the ball looking goal bound.

However, the tie would go on to finish in a goalless stalemate.