Late Manyama strike rescues Chiefs from another defeat – The Citizen 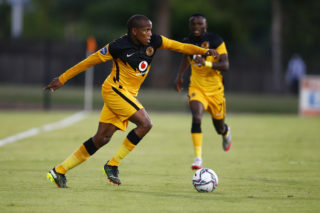 
Lebo Manyama struck late for Kaizer Chiefs yesterday to grab a point against Maritzburg United, though neither goal should actually have stood in a 1-1 DStv Premiership draw at the Harry Gwala Stadium.

With just three minutes on the clock in normal time, Manyama, who will miss the Soweto derby after picking up a fourth yellow card of the season, slotted in at the back post, after Bernard Parker had flicked on Njabulo Blom’s cross. Replays, however, showed that Manyama was clearly in an offside position when Parker headed the ball.

Still, Amakhosi would be entitled to feel justice was done, as Thabiso Kutumela was also offside when he opened the scoring for United in the first half.

Kutumela was involved from the first few minutes too, sending in a wonderful cross that young striker Bongokuhle Hlongwane could only head over the bar.

In the 15th minute, United did take the lead as Jose Ali Meza broke the offside trap and crossed for Kutumela to slot in from close range, for his sixth league goal of the season. The Maritzburg striker did look offside himself when receiving Meza’s pass but no flag was raised.

Middendorp’s side should have doubled their lead not long after, a wonderful cross from Bandile Shandu leaving Hlongwane unmarked six metres out. But somehow the 20 year-old attacker headed over the bar.

Daylon Claasen also rifled a shot over the bar from the edge of the box as United dominated the first half, with Chiefs creating little and captain Willard Katsande looking particularly laboured in midfield, and picking up a yellow card for a late tackle on the stroke of half time.

Before that, Katsande did have Chiefs’ only shot on target of the half, but it was a tame header that was straight at Marcel Engelhardt in the United goal.

Hunt was incensed enough to haul off Katsande at half time, replacing him with Njabulo Blom, while Samir Nurkovic also came on for Lazarous Kambole and Siyabonga Ngezana replaced Philani Zulu in a triple substitution.

Amakhosi immediately improved and Hlongwane almost put the ball through his own net at the wrong, just managing to deflect Reeve Frosler’s free kick away for a corner instead.

Chiefs continued to press and just after the hour mark, defender Erick Mathoho had a chance to volley Chiefs level from a corner, but snatched his shot way over the bar.

Not long after that, Lebo Manyama was clattered in a heavy challenge by Nazeer Allie, but no foul was awarded, and once Manyama got to his feet, he complained so vociferously that he was booked by the referee, meaning he is now suspended for the Soweto derby against Orlando Pirates.

Middendorp brought on Judas Moseamedi, the two-goal hero against Chiefs in the first round of the league, and the striker almost doubled United’s lead, his screamer clattering back off the crossbar.

Chiefs then came close as Manyama’s well-struck volley from a corner was somehow headed clear by Allie.

One of suspected killers of Saudi journalist Khashoggi arrested in France