Forwards drive Bulls to victory over Pumas – The Citizen 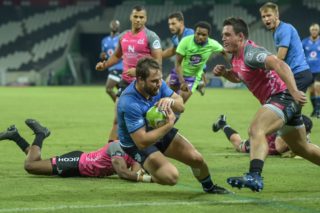 
The Bulls used the brute force of their powerful forward drives in the Nelspruit heat to beat the Pumas 48-31 in their training match at the Mbombela Stadium on Tuesday night.

The visitors outscored the hosts by seven tries to four, and four of the visitors’ tries came from the rolling maul, including one in the first minute of the match through hooker Joe van Zyl just to set the tone.

A heated first quarter saw the Pumas stand their ground, however, as the scores were locked at 14-14 after 20 minutes. But the ill-discipline of the Pumas and the silly mistakes they made, often in their own territory, allowed the Bulls to seize a foothold in the game as they led 27-17 at half-time.

Pumas coach Jimmy Stonehouse did complain about what he felt was some rough justice from referee Rasta Rasivhenge, with the Pumas conceding 19 penalties to just the six of the Bulls on the hour mark. That helped the Bulls storm into a 41-17 lead.

The penalty count rose even further in the final quarter as the Pumas fought back with two tries, but the Bulls had the final say with yet another try from the lineout drive.

Pumas captain Pieter Jansen van Vuren listed ill-discipline and basic mistakes as being among the major reasons they lost the game in his post-match interview.

Apart from the Bulls pack producing an impressively cohesive display and the visitors being generally sharp and accurate, the accomplished play of flyhalf Chis Smith, the explosive form of Stravino Jacobs on the wing, the tidy efforts of scrumhalves Embrose Papier and Bernard van der Linde, the powerful carries of the forwards, a strong performance at centre by Marnus Potgieter and an impressive showing at eighthman by WJ Steenkamp will be among the positives for coach Jake White.