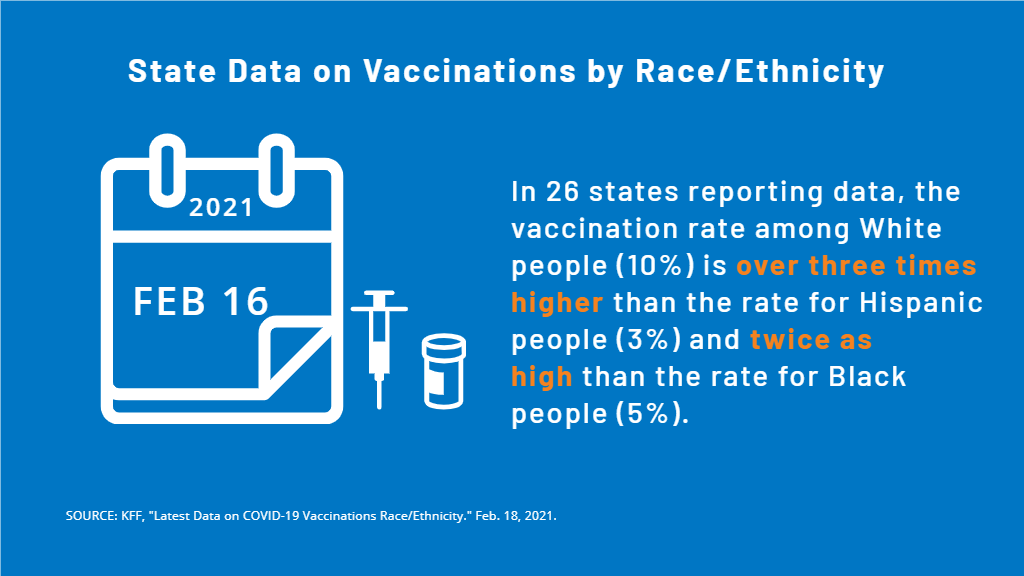 
As noted in previous analysis, preventing racial disparities in the uptake of COVID-19 vaccines will be important to help mitigate the disproportionate impacts of the virus for people of color and prevent widening racial health disparities going forward. Moreover, reaching high vaccination rates across individuals and communities will be key for achieving broader population immunity through a vaccine.

The Centers for Disease Control and Prevention (CDC) is reporting demographic characteristics, including race/ethnicity, of people receiving COVID-19 vaccinations at the national level. As of February 16, 2021, they showed that race/ethnicity was known for just over half (55%) of people who had received at least one dose of the vaccine. Among this group, nearly two thirds were White (63%), 9% were Hispanic, 6% were Black, 5% were Asian, 2% were American Indian or Alaska Native, and <1% were Native Hawaiian or Other Pacific Islander, while nearly 14% reported multiple or other race. However, to date, CDC is not providing state-level demographic data for people vaccinated.

New in this data update, we also calculate vaccination rates by race/ethnicity for the 27 states that report racial/ethnic data based on total people who have received at least one dose of the vaccine. (States that report race/ethnicity based on total doses administered are excluded this analysis.) Table 1 shows the percent of the total population in each racial/ethnic group who have been vaccinated in each of these states and the total across 26 of these states. (North Dakota is not included in the total because data on underlying counts of people vaccinated are not available.)

Data for American Indian and Alaska Native people and Native Hawaiian and Other Pacific Islander people are not reported here due to data limitations that limit comparisons to cases, deaths, and the total population at the state level. However, complete data on vaccinations by race/ethnicity as well as the shares of vaccinations with missing race/ethnicity data among reporting states are available through the COVID-19 State Data and Policy Actions tracker.

Together, these data raise concerns about disparities in vaccination but are also subject to gaps, limitations, and inconsistencies that limit the ability to compare data across states and draw strong conclusions. The data are still early, with vaccinations not yet broadly available to the public in many areas. Moreover, some states have high shares of vaccination data with unknown race/ethnicity and/or reporting “other or multiple races.” Further, 18 states and the District of Columbia are not yet reporting vaccinations by race/ethnicity. Comprehensive standardized data across states will be vital to monitor and ensure equitable access to and take up of the vaccine.

KFF will be continuing to update these data on a regular basis going forward.