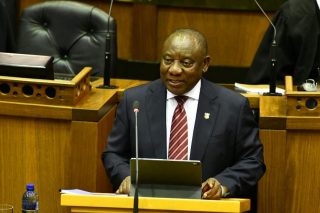 
Recommitting his government to land reform, President Cyril Ramaphosa said this should not be seen as a trade-off with agricultural output.

On Tuesday and Wednesday, for more than nine hours combined, MPs debated the State of the Nation Address (Sona) Ramaphosa delivered last week.

On Thursday, in about an hour, Ramaphosa responded. He focused on South Africa’s positives amid all the gloom and doom brought on by the Covid-19 pandemic.

“South Africa is a country of many endowments. As a nation, we have many capabilities, strengths and attributes that we can and must draw on as we rebuild and transform our society,” he said.

One of these endowments, according to Ramaphosa, is South Africa’s natural resources.

“The fynbos I spoke about last week [during the Sona address] is part of a remarkable biodiversity that is matched in few other places on earth,” Ramaphosa said.

“We have a great responsibility to conserve this diversity of fauna and flora, but also boundless opportunities to use this ancient resource for sustainable growth and development.”

He said by using indigenous knowledge to produce cosmetics and pharmaceutical products, and to develop eco-tourism, South Africa is creating new businesses and new jobs, while making a priceless investment in sustainability.

He said the investment in agriculture and agro-processing would enable the country to fully realise the potential of “this great renewable resource”.

“But to be successful, we need to align agricultural development with an effective and accelerated land redistribution programme,” said Ramaphosa.

“We should not, as some honourable members do, see a trade-off between land reform and agriculture output. They must be complementary and mutually-reinforcing.”

“Providing more land to many more South Africans, along with the means to productively work it, is not only about correcting a past wrong; it is also about building a prosperous and more inclusive future.”

When he spoke in the debate on Tuesday, DA leader John Steenhuisen said Ramaphosa spoke of strengthening the country’s agricultural output during Sona, but reaffirmed government’s commitment to the expropriation of property without compensation.

“And if you’re still unsure how that will go, just take a look at the case of Ivan Cloete, a coloured farmer who has been leasing – and successfully farming – a state farm in the Darling area for the past couple of years.

“Two weeks ago, he was served with an eviction order and told his farm was to be handed over to an MK veteran,” Steenhuisen said.

“That’s straight out of the ZANU-PF playbook.”

Currently, there is an Expropriation Bill before Parliament, and the ad hoc committee amending Section 25 of the Constitution to allow expropriation without compensation is expected to finish its work by 19 March, after which its report would be tabled in the National Assembly.