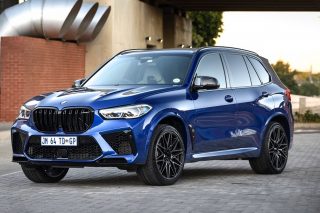 Breaks the record for the fastest SUV we have ever tested.

Getting a car to match its manufacturer’s claimed numbers is extremely rare. Especially up on the Highveld, where the altitude severely affects the way an internal combustion engine breathes and ultimately performs.

We were therefore pleasantly surprised with the results of Road Editor Mark Jones’ high-performance test on the BMW X5 M Competition at Gerotek. By clocking 3.82 seconds in the 0 to 100 km/h sprint, this beast of a vehicle not only managed to come within a mere 0.02 seconds of BMW’s claimed time of 3.8 sec, but it also officially became the fastest SUV The Citizen has ever tested. For the full test results, click here.

Since June 2018, the Mercedes-AMG GLC 63 S has been the fastest SUV on our books with a 3.99 sec sprint. The second place on our SUV list belonged to another offering from Affalterbach, the iconic G-Wagon in G63 guise, which clocked 4.38 sec in March 2019. We have not tested the X5 M Competition’s direct competitor, the Mercedes-AMG GLE 63 S in current guise, an SUV which Mercedes claims can also reach 100 km/h from a standstill in 3.8 sec.

The X5 M Competition’s power comes from the beastly 4.4-litre V8 twin-turbocharged engine that sends 460 kW of power and 750 Nm of torque to all four wheels via an eight-speed sport Steptronic transmission. Its projects the X5 M Competition to an staggering top speed of 290 km/h.

This powerplant does duty in quite a few of BMW’s high-performance offerings, but what is quite notable is the fact that the X5 M Competition weighs in at a hefty 2 255 kg. To get that weight to accelerate in supercar style is quite an achievement. Especially on the Highveld. Take a bow BMW.