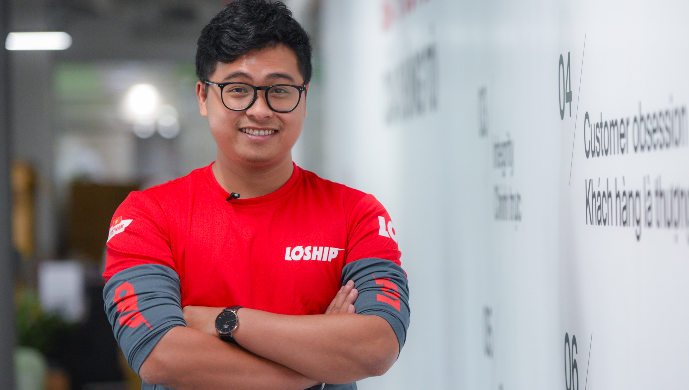 A few years ago, during a trip to China, Trung Hoang Nguyen and his team at Loship — a Vietnamese on-demand delivery app — walked into Haidilao, one of China’s biggest hot pot restaurants.

While waiting for their table, they were allowed to use every service inside the restaurant, such as ice cream, for free. While it looked odd and old-fashioned for them, as customers, they found it impressive.

“We wanted to bring in the model to Loship and were obsessed with offering something new to the table for customers to enjoy while waiting for their order. Then, podcasts turned out to be a perfect thing for us to try,” said Nguyen as he recounted his startup journey for e27.

Also Read: Why is Vietnam going to emerge the strongest post-COVID-19?

What makes the app stand out from its peers is that it has a feature wherein customers can listen to multiple podcasts while waiting for their delivery.

“For the first time, customers can listen to multiple podcasts while waiting for food delivery. They don’t need to log out and look for new platforms to listen to,” Nguyen shared.

He said that ever since the podcast was rolled out, it attracted over 20,000 listeners a day. In December alone, the number of monthly listeners hit 100,000.

Podcasts are just the beginning. Along the way, Loship will look to expand into other forms of audio entertainment — music, audiobooks and audio-only films — to cater to customers’ diverse tastes.

Loship traces its roots back to Lozi, a food reviews app with a ‘buy & sell’ function. Similar to Carousell, the app allowed consumers to list their products, sell in a snap and buy with a chat.

After 12 months into its inception, Lozi attracted about 200,000 users, with the web traffic reaching over two million. It quickly attracted some initial funding and shortly after, it transformed into a hyperlocal C2C e-commerce platform.

“Yet, this initial success was a relatively small piece of the pie, and the scale of the potential wasn’t obvious. Lozi had in place the buyers and sellers, but lacked delivery men. We didn’t know if the transactions between buyers and sellers were completed, or whether any delivery hiccups were occurring along the way.

The best way to know the exact status of the transaction was to control the delivery. Therefore we started Loship, and it quickly became the biggest part of our business,” Nguyen explained.

Nguyen realised that if it was executed right, there was an opportunity for another 1,000x growth.

Currently, Loship has operations in five cities across Vietnam (two megacities and three lower-tier cities). It boasts a total of 70,000+ drivers and has partnerships with 200,000+ merchants and 2 million+ customers.

“Our long-term goal is to bring one million local merchants online, not only high-end restaurants but also local eateries, pocket-friendly joints and everything in between, as well as create an ecosystem of services that can provide everything customers need,” said Nguyen, who was nominated to ‘Forbes 30 Under 30 Asia’ in 2017.

Another key factor that differentiates Loship is “local advantage”. Loship, remarks Nguyen, is the only player that understands the local customers on a deeper level.

“As seen in the failure of Foodpanda in Vietnam, it is clear that local market knowledge and understanding are at the forefront. The inability of Uber and Uber Eats in the ASEAN is partly attributable to Uber’s lack of localisation efforts,” he opined.

Also, Loship is the “only player” that applies the free-shipping strategy on all orders and offers one-hour delivery, which not many in the market are capable of doing.

The app primarily makes money from commissions, delivery fee, advertisement, or supplying ingredients to merchants. Monetisation of the podcast feature is not in the offing.

“When it comes to podcasts, it’s just a pure place for customers to enjoy and be entertained. If you look at other companies, you will see that they spend a hefty amount of money to satisfy and retain customers. And if you look at things like that, our investment in podcasts will be far less than other marketing expenses. Still, it has much more impact on customer retention, pushing our customer services to the next level. For podcasts, we see ourselves more like Netflix — without Advertisement or Halidao — with free add-in services,” he said as he talked about the company’s revenue streams.

Also Read: COVID-19 accelerates food delivery startups in SEA with Grab responsible for near half of growth: Report

However, compared with other countries in Asia such as India or Japan, the size of this market in Vietnam is still tiny, accounting for only 0.2 per cent market share in the world food delivery market. That said, the market has plenty of room for tremendous growth.

While in lower-tier cities with typical Vietnamese features, for example, the Mekong Delta region, Loship is the one to maintain a dominant lead, thanks to its utmost local advantage.

“Vietnam poses many favourable conditions for food delivery, including a vast market, substantial user base and high internet and mobile penetration rates. As such, the market attracts many aggressive players to tap into and dominate the scene,” he said.

“These big players have all the resources required to capture the majority of market share, and therefore, the local food delivery startups are struggling to survive. Also, since customers have a wide variety of options to choose from, they are more likely to switch to other apps offering more generous promotions, which leads to a low level of customer loyalty,” he pointed out.

As a local startup, Loship confronted these challenges, but the startup found a way out. It strategically entered into unexplored and relatively untouched markets like lower-tier cities, grew the customer base, and then took things forward from there.

Over its four years of existence, Loship has raised several equity rounds. In October 2020, Loship secured a bridge round of financing led by Singapore-based Vulpes Investment Management.

Previously, in October 2019, it closed its Series B round with an eight-digit investment from South Korea’s Smilegate Investment, with participation from DTNI, Ascendo Ventures (South Korea), Hana Financial Group (South Korea), and the local accelerator Vietnam Silicon Valley.

Also Read: ‘SEA’s podcast market is ripe for adoption; we just need to educate the public’: Joseph Phua of M17

A few days ago, Skype co-founder Jaan Tallinn, through his investment vehicle MetaPlanet, invested in Loship. According to Nguyen, it is MetaPlanet’s first investment in Southeast Asia.

“The MeraPlanet’s investment will help us build a much stronger image of Loship as a national startup hero. This helps Loship become a default gate for prominent tech figure around the world when they look at Vietnam. Besides, the competition will be much more competitive in the longterm, therefore, via Jaan Tallinn, we can observe more deep tech through their Portfolio companies so we can used for Vietnam market,” he signed off.

The post How Loship gives Grab a run for its money in Vietnam with a unique combination of food delivery and podcasting appeared first on e27.