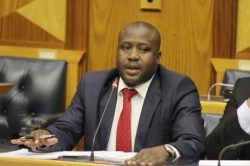 
Western Cape Judge John Hlophe gave state prosecutors a stern warning after their witnesses failed to appear in court to testify in the corruption trial of ANC MP Bongani Bongo.

Bongo, a former State Security Minister, has pleaded not guilty to a corruption charge emanating from an accusation that he tried to disrupt a parliamentary inquiry into state capture at Eskom on 10 October 2017.

At the start of proceedings on Tuesday, the court heard testimony of then evidence leader of the inquiry into state owned enterprises, advocate Ntuthuzelo Vanara.

Parliamentary officials called as witnesses frustrated Hlope when they failed to appear in court.

Prosecutors told the court they were planning to examine them on Friday.

Hlophe, however, said they had elected not to come and “didn’t take this seriously”.

“This borders on contempt. I am very angry. Nobody wastes his time,” he said.

The matter against Bongo comes after former president Jacob Zuma announced, in 2017, an inquiry into the power utility following several allegations of corruption.

According to an initial affidavit by Vanara, who was the inquiry’s evidence leader at the time, Bongo asked him to fake an illness and take sick leave because the inquiry could not proceed in his absence.

Bongo also allegedly offered Vanara, who was also the former acting registrar of members’ interests in Parliament, a cash bribe.

All Vanara allegedly had to do was “name the price” and explain to Bongo how he would help to stop the inquiry.

Bongo would, in turn, go back to the “Eskom people” and explain Vanara’s plan to stop the inquiry and the price they would have to pay for his (Vanara’s) assistance.

Money would then be given to Bongo who would hand it over to Vanara, the State alleges.

Despite the delays, secretary to National Assembly Masibulele Xaso took the stand.

Xaso told the court of a meeting in Stellenbosch between himself, Vanara and secretary to the National Council of Provinces, Phindela.

He also said Vanara had told him that he (Vanara) was concerned Bongo knew about meetings planned with witnesses in the Eskom inquiry.

Xaso and Phindela agreed to inform Twaya, which they did while at their workshop in Stellenbosch, the court heard.

In cross-examining Xaso, advocate Mike Hellens SC, Bongo’s counsel, questioned why he did not report the alleged crime.

In response, Xaso said a process was followed and that was “to report it to the acting secretary to Parliament”, whom he described as the higher authority.

He also, based on the merits at the time, didn’t believe it had to be reported to the police.

Hellens, however argued, that Xaso waited until there was a “media furore” to depose an affidavit, and only after he was approached by police.

Proceedings are set to resume on Friday.