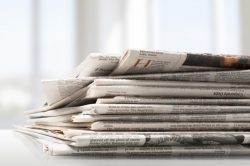 
Audit Bureau of Circulations data for the fourth quarter of 2020 is harrowing: there will be no rebound for print, and newspapers in particular.

The long, slow structural decline of the sector in South Africa has reached the point of no return. Circulations for daily newspapers are down by 40%, on average, over one year. Not included in this drop are the two titles that ceased publication as dailies during 2020: Die Volksblad (Bloemfontein) is now “digital only” while the DFA (Kimberley) now only publishes on Fridays.

In extreme cases, including many titles in the Independent Media stable, the declines are over 60%. Total circulation for the Pretoria News is down 80% since 2019. It sells just over 1 900 copies a day now.

Certain titles have fared better, with year-on-year declines of under 20%. Die Burger, which seems to be thriving in the vacuum being produced by the regression of the Cape Times and Cape Argus (both down 62%), saw circulation down only 7%.

Some titles are being propped up by free circulation, where thousands of free copies are given away daily to help the papers justify their advertising rates. The Star has “free circulation” of 8 157 copies a day, which accounts for nearly four in 10 of its papers “sold”. If one considers paid circulation only, Business Day sells just 1 162 fewer copies a day than The Star.

Across a five-year period (since Q4 2016), the declines are even more dramatic.

Overall, circulation for the 17 daily papers in the country is 60% lower. Eight papers have seen declines of more than 60%, with Pretoria News down 87%, The Star down 75% and Cape Argus and Cape Times each down around 70%. The best performing title since 2016 is The Citizen, with a circulation decline of 32%. Of course, the decline is not new, nor is it unique to the South African market. Daily news has become a commodity and is freely available on the internet. Weekend papers have hardly fared much better. Circulation of the Sunday Times is down 44% over one year. Certain titles have done themselves few favours and are suffering material issues around credibility.

Still, cover prices continue to climb to cover the cost of printing and trucking papers around the country. But it’s the advertising that pays the real bills. As this has steadily dropped, newsrooms have been ruthlessly cut to the bone. This has kept titles profitable, albeit some very marginally so. There are no more cuts to be made.

What makes the stark declines in 2020 different is that for many titles, these new lows mean ever increasing advertising rates are simply no longer defendable.

Covid-19 will be blamed (one estimate puts the decline in print ad spend last year at over 30%), but the coming reckoning is inescapable for many.

Advertising agencies will measure the cost of reaching 1 000 people across various media types and products. With the dramatic drops over the past year, these numbers will have skyrocketed. This surely means that price-and-product advertising by the national retailers, the only real national advertising left in daily papers, will start to fall away as the costs of reaching every 1 000 people are no longer rational. Already, much of this is being sold at steep discounts simply to ensure annual commitments.

Once this happens, papers will shrink even further and the economics will reach a point where it no longer makes sense for many of these titles to publish. One or two may pivot to a free model to prop up circulation and defend the advertising they do have. (If Independent Media was run as a normal business, the two Cape titles would have been merged and Pretoria News would’ve likely been shut years ago.)

What happens when these 17 titles shrink to a dozen? This is a very real possibility.

In an era where fake news and propaganda is pervasive, there are fundamental reasons to be concerned.

Worse, how do we hope to hold government to account when there are simply no newsrooms or skills within them to do so?

There are reasons to hope. Daily Maverick, Ground Up, amaBunghane, News24 and Netwerk24 as well as niche sites like Moneyweb, TechCentral and MyBroadband/BusinessTech have built sustainable, sizeable businesses online.

Increasingly, they are using business models that favour subscription. Online advertising will yield some revenue, but no one is able to run a news organisation on Google AdWords or programmatic advertising revenue. The numbers aren’t big enough. Added to this is the fact that print publishers lost much of the opportunity to convert their advertisers to digital long ago.

Two fundamental questions remain: how does the news industry convert many more than the few thousand people who already pay to become online subscribers? And how do digital publishers attract ad spend away from hyper-efficient Facebook and Google?

This article was republished from Moneyweb with permission