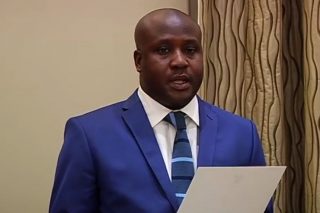 Vanara took the witness stand in Bongo’s trial. Bongo is charged with corruption after he allegedly tried to bribe Vanara.

Vanara testified that on 4 October 2017 – a Wednesday – Bongo allegedly phoned him three times while he was making his way to Johannesburg for a meeting with Khoza.

When he took the first call while en route to the airport, he told Bongo he was heading to Durban, instead of Johannesburg, where he was actually heading.

“It became apparent to me that I had to tread very carefully,” Vanara claimed.

Bongo allegedly also wanted to know whether they would meet with the Eskom board. Vanara said yes they would, but the meeting wasn’t confirmed.

Bongo then allegedly wanted to know when he was getting back on the Friday so that they could arrange a meeting.

Vanara agreed to meet him the following Monday.

A few minutes later, he again allegedly received a call from Bongo, who allegedly wanted to know if they could meet at the airport that Friday.

Vanara said they would meet the Monday. After Vanara landed in Johannesburg, he got another call.

This time Bongo allegedly wanted to know if the meeting with Khoza would take place in Cape Town.

Vanara said the meeting would be in Johannesburg and that he would fly from Durban in the morning.

The meeting never took place. Khoza was called to a meeting with then-minister of public enterprises Lynne Brown in Cape Town, Vanara testified.

The following Monday, back in Cape Town, Vanara allegedly got a call from Bongo, who wanted to meet. Vanara had already left the parliamentary precinct.

The following day, Bongo arrived at his office in the Old Assembly Building at Parliament.

“He then said he had a request of the acting chair of the Eskom board to meet with me,” Vanara testified.