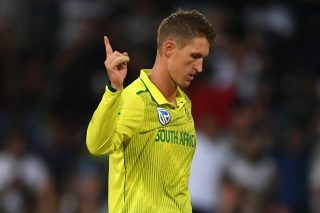 
Dwaine Pretorius was obviously the star of the show as South Africa levelled the T20 series against Pakistan on Saturday with the best figures in the history of Proteas T20 cricket, but the all-rounder said the efforts of spin bowlers Tabraiz Shamsi and Jon-Jon Smuts in the middle overs of the innings were as worthy of reward as his incredible return of five for 17.

Pretorius broke the national record previously held by Ryan McLaren, who took five for 19 against the West Indies at North Sound in 2010.

But before his second spell, wrist-spinner Shamsi bowled brilliantly in the middle overs to take one for 16 in his four overs, while Smuts conceded just 20 runs in his four overs of canny left-arm orthodox.

“That was next-level bowing by Shamo and Jon-Jon and they could easily have taken the wickets instead of me,” Pretorius said after South Africa’s six-wicket win.

“That’s why I say it was a collective effort by the attack and the two spinners tightened the noose superbly. And Heinrich Klaasen captained the team really well, changing the bowlers around a lot so no-one could get settled on the batting side.”

Pretorius also praised the batsmen, especially Reeza Hendricks and Pite van Biljon, who both scored 42 and played the spinners aggressively, showing that even a daunting leg-spinner like Usman Qadir is only human as he faltered under pressure, conceding 43 runs in his four overs.

“The batsmen have actually played a lot of good cricket lately, but then it’s just been one or two overs that we lose really badly,” he said.

“As a batting unit, they’ve tried to focus on making sure that when you hit a bad patch, you don’t lose a cluster of wickets. They’re trying to keep their intensity high and they did that unbelievably well today. It’s about the big moments and we played those better tonight.”