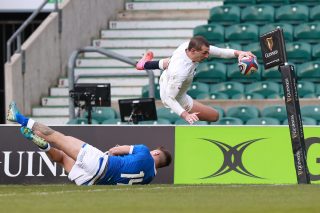 
Jonny May admitted his spectacular try against Italy had been a “one in God knows how many scenario” after reigning Six Nations champions England returned to winning ways with a 41-18 victory at Twickenham on Saturday.

England ran in six tries in total against the ultimately outclassed Azzurri but none were more dramatic than May’s effort on the stroke of half-time when the wing lept high in the air, in the manner of an American football player diving into the end zone, brushed the corner flag and touched down as he evaded the challenge of Italy’s Luca Sperandio.

“That is a one in God knows how many scenario but you do need that one when you are just close to the line and you can use the flag,” May told reporters following his 32nd try in 63 Tests.

“It just happened instinctively, it is just a little skill you need to have there and luckily I was able to execute it today (Saturday).”

May is now second in England’s all-time list of try-scorers. Rory Underwood is top with 49 in 85 Tests.

Victory saw England get their title defence back on track after they started the tournament with a try-less 11-6 defeat by Scotland last week — the Scots’ first win at Twickenham since 1983.

“It was a tough week, I will be honest,” said May. “You have weeks like that in sport you really do, you can’t tell when they are going to come and they hurt when they happen.

“It is days like that that make you a better team and a better player,” the 30-year-old added.

England coach Eddie Jones, who acclaimed May’s try as “absolutely brilliant”, was encouraged by his side’s display ahead of their next match, away to Wales on February 27.

“I was really pleased with the attitude of the players, the positivity, the energy — the execution has a bit to go but that’s OK –- now we get ready for Wales,” Jones said.

This was Italy’s 29th successive Six Nations loss, a run stretching back to 2015, and meant they had been beaten in all 28 of their Tests against England.

But following a 50-10 thrashing by France last week, they produced a much-improved performance.

Italy in fact defied all predictions by opening the scoring with a third-minute try from wing Montanna Ioane.

“I think it ended up being a good thing for us,” said veteran Australian coach Jones. “When you’re playing a team you are supposed to win against it sharpens you up a bit –- I wasn’t too perturbed.”

Meanwhile Italy counterpart Franco Smith said: “It was another step up for us, a step in the right direction. The spine of our team is a really young group, but this was much better than last week.”