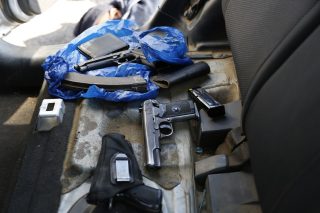 Picture for illustration. Firearms recovered by police during an operation. Picture: Supplied

It is believed the man supplied firearms to criminal gangs in the Western Cape.

The Directorate for Priority Crime Investigation (Hawks) arrested a notorious firearms dealer in Durban on Friday.

The 41-year-old Durban-based gun shop owner is believed to have supplied criminal gangs in the Western Cape with firearms, the organisation said in a statement.

“The Hawks led team seized 17 illegal firearms in George in transit from Johannesburg and further investigation revealed that those firearms were allegedly destined to Cape Town’s criminal gangs. A further 44 firearms were seized from his business during the investigation process,” read the statement.

The Hawks said a forensic examination of the confiscated guns linked them to various criminal activities, including murder and attempted murder.

The suspect is set to appear in the Worcester Magistrate Court on 15 February 2021.

This article first appeared in the Northglen News and has been republished with permission.