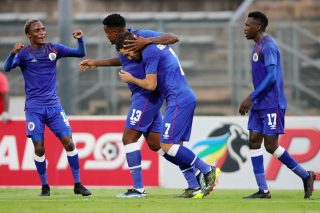 
Although Mamelodi Sundowns have a game in hand over SuperSport United, they will not rest easy knowing that their age-old rivals are breathing close to their necks in the fight for the DStv Premiership title as United reduced Sundowns’ lead to two points.

SuperSport beat Cape Town City 2-1 at the Lucas Moripe Stadium where Evans Rusike showed his class in the first-half to help Matsatsantsa take the lead.

As though he was heeding the call from club chief executive officer, Stanley Matthews who said he will need to up his game and score goals in order for his contract extension to be taken into consideration, Evans Rusike could not find the back of the net but he provided an assist that could appease his employers.

Rusike did well down the right to reduce defender Terrence Mashego into a body guard instead of a marker as he left him for dead on his way to confusing more of City’s defenders in the box before finding Lungu, who made no mistake with the softest of tap-ins to put United in the lead as they went into the break as the happier team.

The second stanza saw the visitors come out with different energy and it paid off within moments from the restart.

Bradley Ralani proved why he is City’s most important player, at least where the attack is concerned, as he navigated through SuperSport United’s rear guard, but only just as he created space for himself to release a shot that Man-of-the-Match Ronwen Williams – who made countless saves – knew very little about as he levelled matters for the team.

Striker Thamsanqa Gabuza was the big difference that separated the two sides, coming off the bench to score the match-winner, which happened to be his six league goal of the season.

He was beautifully assisted by his strike partner Bradley Grobler, who played ping-pong with his mate and Gabuza buried it with ease with a header that rose high enough to lob over the lanky Peter Leeuwenburgh to make sure The Spartans got all three points.