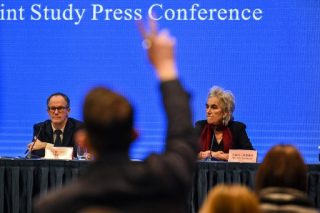 This brings the total number of cases detected in the country to 1.49 million. With a recovery rate of 93%, official statistics show that there are 56,246 active cases.

An additional 151 deaths were reported, bringing the death toll to 47,821.

Use the COVID Alert SA app to protect yourself, your loved ones and your community. Start using this privacy preserving app today. Add your phone to the fight! Download the Covid Alert SA app now! https://t.co/8YKEqaiiRF pic.twitter.com/YbNhXT4lqZ

A study published on Friday, led by authors from the National Blood Service, shows that a large percentage of the population has likely already been infected with SARS-CoV-2 and that there are striking differences in prevalence between blacks and whites.

Over seven days between 7 and 25 January, 4,858 blood donors were tested for antibodies to the virus that causes Covid-19. These antibodies help the body neutralise the effects of SARS-CoV-2 and we have them only if we have been previously infected, the study found.

Extrapolating their results to the whole population, the researchers estimated that 63% of people in Eastern Cape have been infected since the epidemic started, 32% in Northern Cape, 46% in Free State and 52% in KwaZulu-Natal. This is massively more than the clinically confirmed case rates of between 2% and 3% in these four provinces.

WHO experts said on Saturday they had not received access to enough raw data while in China probing the pandemic’s origins, saying more was needed to detect possible early Covid cases.

“There is a mix of frustration but also a mix of realistic expectations in terms of what is feasible under which time frame,” he said, adding he hoped the requested data would be made available going forward.

The four-week WHO mission to China to uncover the origins of the coronavirus wrapped up earlier this week with no conclusive findings.

Experts believe the disease — which has killed nearly 2.4 million people worldwide — originated in bats and could have been transmitted to humans via another mammal.

But while the virus was first discovered in Wuhan in December 2019, it remains unclear if that is when and where the outbreak actually began.

The expert team determined that there were no signs of large clusters of Covid-19 in Wuhan or elsewhere prior to December that year, but did not rule out sporadic cases spreading before that.

Ben Embarek said the team would have been keen to have access to raw data about earlier cases of illnesses, including pneumonia, flu and fever, that could conceivably have been Covid.

Prior to the mission, Chinese scientists had scanned their systems and identified 72,000 such cases between October and December.

They had applied sets of criteria to determine if the cases could possibly be Covid, whittling down the list to just 92 cases worth examining.

Sixty-seven of those were submitted to serological tests. They all came back negative for Covid.

Ben Embarek said the team had asked in vain for the specific criteria used.

“We are trying to understand that process of getting from 72,000 down to 92”, he said, saying access to the raw data requested would make it possible to apply “less stringent criteria so we have a larger number to work with.”

“That will be a proposal for studies in the next phase,” he said.

John Watson, a British epidemiologist and a member of the team, acknowledged that there was a “full and frank discussion” about access to the data, but said focusing too much on that aspect would be unfair.

While the team’s Chinese counterparts did not share all the raw data requested, he said, they had shared “enormous detail” about their work, methods and results.

Another team member, Peter Daszak, meanwhile rejected on Saturday a report that there had been shouting matches between the international team and their Chinese counterparts over data access.

“This was NOT my experience on @WHO mission,” he said in a tweet, adding: “We DID get access to critical new data throughout.”

The team members have had to walk a diplomatic tightrope, with the US urging a “robust” probe and China warning against politicising the issue.

On Saturday, US national security advisor Jake Sullivan voiced “deep concerns” over China’s Covid-19 investigation, and urged it to “make available its data from the earliest days of the outbreak”.

The US and others have been fiercely critical of delays in sending the WHO team to Wuhan, with the mission taking place more than a year after the first cases surfaced.

Ben Embarek acknowledged it would “have been fantastic” to go sooner, but pointed out that when disease outbreaks occur, the first reaction is to treat patients, not to try to figure out how it happened.

He also stressed it would have been impossible to conduct investigations during the early months, when Wuhan under strict lockdown.

Going forward, he said, the world should consider trying to run source investigations “in parallel”.

Watson agreed that it was still possible to learn much more about the early stages of the pandemic.

But he ruled out that investigators would “come up with a smoking gun” and determine exactly where and when the virus jumped from animals to humans.

That is “really very unrealistic”, he said.