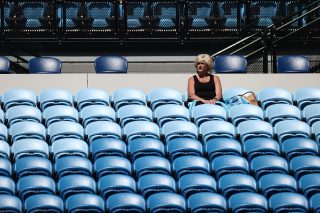 
Authorities ordered a snap, five-day lockdown in Melbourne on Friday to contain a new coronavirus outbreak, meaning the Australian Open Grand Slam tennis tournament, which began in the city this week, will have to go ahead without fans.

Under the restrictions, some five million people in Australia’s second-biggest city will have to remain at home for five days from midnight, except for a limited number of permitted essential activities.

Premier Daniel Andrews of Victoria state, which includes Melbourne, said the lockdown was necessary to halt an outbreak of the “hyper-infectious” UK strain of Covid-19, which leaked from a quarantine hotel at the city airport.

“These restrictions are all about making sure that we respond appropriately to the fastest-moving, most infectious strain of coronavirus that we have seen,” Andrews said.

Andrews said the Australian Open, the season’s first Grand Slam tournament that began Monday and has attracted most of the world’s top players, can continue without crowds.

He said the tennis Open venue would be considered a “workplace” able to function with strictly limited staff.

The Open organisers did not immediately comment on the new development, which came during controversy over the forced two-week quarantine that many players had to undergo on their arrival in Australia.

The outbreak leaked from an airport hotel that was housing international travellers in mandatory quarantine and has so far infected 13 people, including staff and their families.

Overnight it emerged that one infected person had spent several hours at a cafe in an airport terminal, potentially infecting individuals heading to other parts of Australia.

Andrews acknowledged that the spread of the outbreak had so far been limited to hotel staff and their families.

But he said the UK strain was “so hyper-infectious, and moves so fast, that it is presenting a very, very real challenge to our status, our stay-safe, stay-open, our precious thing that we’ve built.”

Melbourne spent more than 100 days under lockdown last year to crush an earlier coronavirus outbreak that infected thousands and killed some 800 people. That lockdown ended in late October.

Two other Australian state capitals, Brisbane in the east and Perth in the west, recently underwent similar snap lockdowns in response to cases of the UK strain leaking from hotel quarantine.

In both instances, the outbreak was quickly contained.

Australia has been among the world’s most successful countries in containing the coronavirus, with some 900 deaths for a population of 25 million.